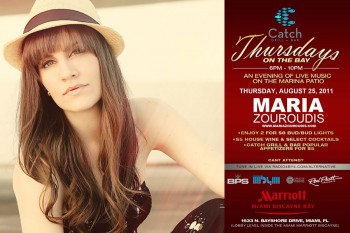 Looking for a great relaxed environment on a Thursday evening?

Join us each and every Thursday at Catch Grill & Bar, located inside the Marriott Biscayne Bay, as we feature live music on the marina patio. The event begins at 6PM w/ the start of the musical performance @ 7PM ending at 10PM.

Enjoy a beautiful bay view and listen to the sounds of local artists that provide a set list of originals and covers that provide a great experience to compliment the atmosphere.

Greek-American songstress, Maria Zouroudis is known for her powerful, yet heart-felt voice, delivering a fusion of pop, R&B and acoustic soul. Utilizing the internet to market her talent, Maria has captured over 6.6 million views and 30,600 subscribers on YouTube alone.

From creatively remixed covers to original compositions, Maria consistently delivers unique content that has allowed her to appeal to a very diverse, worldwide fan base.

Maria has received commercial airplay in the US and has been put on rotation in Brazil and the Philippines. She has also been featured on top Greek morning show â€œFotis and Maria Live,â€ and graced the cover of Greeceâ€™s popular newspaper â€œTo Proto Thema.â€œ

In February, 2010, Maria was featured in the Youtube edition of â€œWe Are the World,â€ which received 1.7 million views in its first month, as well as national TV coverage on networks such as CNN and ABC (featured on Diane Sawyerâ€™s ABC World News). She is currently songwriting for other artists, working on her own album and performing nationally as well as internationally.

The first 20 guest that email me at RP@rodprattpresents.com will receive complimentary valet parking.