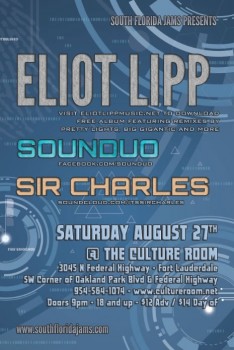 Eliot Lipp is bringing his signature sound, a crossbreed of 90â€™s Hip Hop and House, 70â€™s Funk fusion and classic Electro to the Culture Room on Saturday, August 27th. On his newest release, Brolabs, Lipp remixes everyone from Pretty Lights, Big Gigantic and Paper Diamond to Samples, Mux Mool and many more. Lipp says, “Brolabs is all about collaborating with friends I like to work with and whose music I respect. Each track on Brolabs is a unique collaboration between each artist and myself, not a faceless email trade of songs and samples. Close friends, great artists, quality time and good music…..thatâ€™s Brolabs.â€ Lipp will be supported by Sir Charles, the newest addition to

Eliot Lippâ€™s sound, one that uses vintage gear to create a unique take on Hip Hop and House, has quickly garnered respect among the industryâ€™s most influential musicians and producers. Since being discovered by Scott Herren (aka Prefuse 73) in the mid 2000â€™s, Lipp has released albums on the cutting-edge labels Eastern Developments, Mush and Hefty, and relentlessly toured all over the globe. Lippâ€™s signature sound, a crossbreed of 90â€™s Hip Hop and House, 70â€™s Funk fusion and classic Electro, has revitalized electronic music in the States and everyone from SPIN and URB to Pitchfork has taken notice. www.EliotLippMusic.net

Formerly known as Monozygotik, Charles Weinert has hit milestones many producers only dream to achieve. At the young age of 20, his sound has evolved from a dubstep monster to a far more sophisticated, bass hungry sex beast that thrives on intelligent low end manipulation and melodic over-tones that when meshed with underground and mainstream hip-hop acapellas takes on a life of its own. Playing to sold-out crowds primarily in the southeast and beyond, 2011 is looking to be a huge one for the young prodigy. Charles has shared club gigs with many big players in the electronic game right now including Bassnectar, Big Gigantic, Bonobo, Conspirator, Paper Diamond, RJD2 and more. Recently signing with Eliot Lipp and Old Tacoma Records, Charles is finding himself mentoring under one of his greatest inspirations. Charles released a new EP this Summer, in advance of dropping his new album this Fall. www.Soundcloud.com/ItsSirCharles

SOUNDUO is a musical collaboration between Miami-based producers and musicians Will Mills and Zach Morillo. It is a blend of bass heavy musical genres, sample-based electronic hip-hop, dubstep and traditional dub stylings. Their live performances feature a blend of electronic AVJ performance, live instrumentation, remixes, and dub effects. SOUNDUO strives to bring a positive message through music. www.Soundcloub.com/SOUNDUO