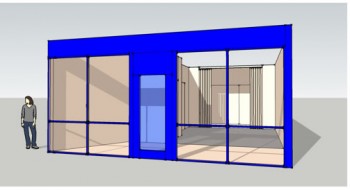 Hard Poems in Space. A new collaborative project between NDS and Gallery Diet, bringing together invited Artists and Designers to make functional objects to be displayed as an interactive social environment at NDS.

The project, which began during the summer of 2011 through as series of workshops at NDS (Nektar De Stagni Shop) and Gallery Diet, was conceived in order to bring together invited Artists and Designers to make functional objects. Participants are working collaboratively or individually, but with the goal of creating an overall exchange between different practices, as well as create a cohesive and interactive social environment, to open on Fashionâ€™s Night Out on September 8th, 2011, at the NDS Design District Space.

The projects collaborative spirit is manifesting in three parts; a Brainstorm, a Buildout, and the Exhibition.

The Brainstorm phase consists of a series of workshops/discussions which bring together exhibition participants and industry leaders and innovators (July/August). The most recent discussions featured Alexandra Cunningham, director of exhibitions for Design Miami and Terrence Riley, former director of MOMA NY.

The Buildout portion of the project is currently taking place (August) at both the NDS and Gallery Diet spaces and consists of an open studio practice, where participants are being encouraged to work inside of a communal space (also open to viewers) and begin building their object prototypes. On display is also text outlining the project and excerpts for various emails and web posts which have served as inspiration and fostered exchange between the participants.

The Exhibition portion of this project is the final showcase at NDS this Fall. All of the prototypes created for the project will come together and form one cohesive, interactive environment which will be activated by a series of dinners, performances, and events throughout the fall. (Programming highlights TBA)