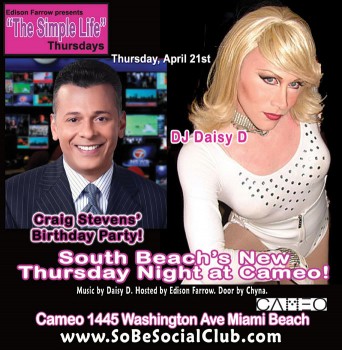 At 7NEWS, Stevens has reported a wide range of stories: several hurricanes beginning with “Andrew,” the Oklahoma City bombing, elections from the local level to national races, including the disputed 2000 Presidential Election from Austin, Texas. He spent weeks following the murder of fashion designer Gianni Versace and the manhunt for Andrew Cunanan, Pope John Paul II’s visits to Cuba and the United States, the death of JFK, Jr., the Elian Gonzalez saga, and Fidel Castro’s visit to the United Nations.

At “The Simple Life” Thursdays, in the new location at Cameo, DJ Daisy D continues to rock the house with her super energized, open-format music that keeps the crowd dancing.
For more information, go to www.SoBeSocialClub.com