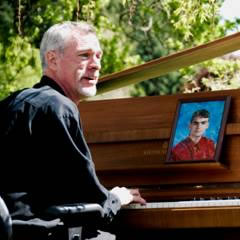 Insignia, the vocal ensemble of the Miami Gay Menâ€™s Chorus, will present New World Waking! comprised of songs composed by Steve Schalchlin, inspired when he played the piano on which John Lennonâ€™s created Imagine. The concert takes place on Sunday, April 10th at St. Stephenâ€™s Episcopal Church in Coconut Grove

It is with this vision that Steve Schalchlin was inspired to create New World Waking.

â€œNew World Waking came together in my mind on the day I was selected by pop star George Michael (and his partner, art gallery owner Kenny Goss) to play John Lennon’s Imagine Piano in the front yard of a house in Olympia, Washington as part of a photographic project,â€ states Schalchlin on his website. The piano was being taken to places where acts of violence occurredâ€¦including the kitchen of Alec and Gabi Clayton, where their son, Bill, had taken his life after a gay bashing.â€

â€œI put my hands where John Lennon’s hands once were, the instrument whose sound inspired the song ‘Imagine’, and I knew in that moment what New World Waking was meant to be: A journey to find a simple song of peace.â€

Steve Schalchlin is best known for writing the music and lyrics to two critically-acclaimed, award-winning off-Broadway pop gospel musicals The Last Session and The Big Voice: God or Merman?, written with his life partner of 23 years, playwright and actor, Jim Brochu.

He draws his musical influences from the small town gospel church music he grew up with in Arkansas, along with the Top 40 radio of the late â€˜60s/early â€˜70s, blues he learned on the Texas Gulf Coast, protest folk and, later in life, musical theater.

Under the artistic direction of Anthony Cabrera, Insigniaâ€™s concert reaffirms Schalchlinâ€™s quest and conviction that music can be a vehicle that transcends all boundaries, be they political, religious, ethnic or simply borne out of indiscriminate hatred. It is a journey to find a song of perfect peace, a musical journey styled in pop, salsa, gospel and low down dirty blues. It reflects a desire to effect change, reminding us that we are not alone in our desire and ability to do so.

Founded in 1999, Miami Gay Menâ€™s Chorus is an all-inclusive, community-based organization of gay men and gay-supporting people that inspires and changes lives through the power of music. With humor and heart, they proudly entertain their audiences while striving for artistic excellence.