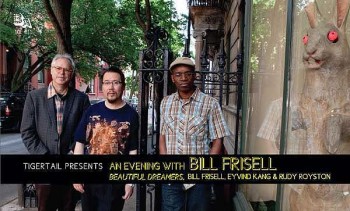 Beautiful Dreamers, with Frisell (guitar), Eyvind Kang (viola) and Rudy Royston (drums) redefines sonic beauty as much as it redefines the jazz trio. One of the leading guitarists in jazz since the late ’80s, Frisell’s eclectic music touches on progressive folk, classical music, country music, noise and more. Bill Frisell has collaborated with artists as diverse as Elvis Costello, Bono, T-Bone Burnett, Paul Simon, McCoy Tyner, Ornette Coleman, Brian Eno, Ry Cooder and many more â€“ a testament to his virtuosity as a guitarist, bandleader and composer. He is a Grammy winner and two-time nominee including a 2009 nomination for Best Jazz Instrumental Album, a 9-time Best Guitarist winner in the DOWNBEAT Critics Poll (including 2010) and three-time DOWNBEAT Readers Poll winner for Best Guitarist, and the Reigning Jazz Awards Guitarist of the Year (2008 & 2009).

Go to www.tigertail.org for maps and directions