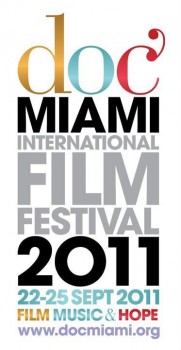 About Us
Our organization is dedicated to promoting the best that documentary film making has to offer worldwide. We seek to provide film makers a forum which promotes their unique contributions to the evolution of the cultural arts within South Florida and within the entertainment industry as a whole. In addition we:

– Provide a documentary film festival to promote the art form of up and coming documentary filmmakers at a local, national and international level.
– Provide educational outreach programs for young filmmakers grades 6-12.
– Host three benefit concerts to raise funds in order to build much needed schools in Tanzania!

Recognized by ProductionHub as the “Spiciest Film Festival”, DocMiami was more than humbled that the beautiful Olga Guillot “Queen of Bolero” was able to share the 2010 DocMiami festival with us and that she was able to be presented the first â€œEl Rey” Tito Puente Contribution to the Arts Award by Tito Puente Jr. The DocMiami International Film Festival, showcased three days of cutting edge international documentary filmmakers and three nights of outstanding music concerts, in a celebration of documentary filmmaking at a global level nestled in sunny South Florida. The festival brought together emerging documentary filmmakers, studentsâ€™ grades 6 -12, as well as film and music enthusiasts in a truly bohemian, one-of-a-kind event. DocMiamiâ€™s music concerts benefit the non-profit, Brick by Brick for Tanzania, where performers such as: Melton Mustafa, Tito Puente, Jr., Prince Emmanuel Abiodun Aderele, Jamie Catto, Rich Ferguson, Luis Bofill and Band and Rock n’ Roll Royalty featuring Eloy “Rali”, contributed their talents to assist school children in Tanzania whom are combating not only poverty but also a drought, hunger and the AIDS crisis. The 2011 Event will continue in the same spirit presenting film, music and art all in one location here in South Florida. Join the excitement!