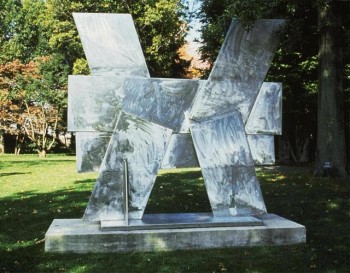 From 1940 until his death in 1965, David Smith lived in the hills above Bolton Landing, near Lake George, in upstate New York. The open landscape framed by wooded hills surrounding his home and studio, “Terminal Iron Works,” informs his work in subtle and often unpredictable ways. One of the best known images of Smith shows him seated on the terrace of his house looking at a field studded with his powerful steel constructions; studying his work against the Adirondack landscape was an integral part of his process. More surprisingly, Smith’s sculptures often allude directly to landscape, a theme not usually associated with work in three-dimensions. This talk examines the unexpected conversation between Smith’s potent abstract constructions in steel and the natural world.
Karen Wilkin is a New York-based independent curator and critic, specializing in 20th century modernism. Educated at Barnard College and Columbia University, she was awarded a Woodrow Wilson Fellowship and a Fulbright Scholarship, to Rome. Ms. Wilkin is the author of monographs on Stuart Davis, David Smith, Anthony Caro, Kenneth Noland, Helen Frankenthaler, Giorgio Morandi, and Hans Hofmann, and has organized exhibitions of their work internationally. She is the Contributing Editor for Art for the Hudson Review and a regular contributor to The New Criterion, Art in America, and the Wall Street Journal.
Ms. Wilkin teaches in the Master of Fine Arts program of the New York Studio School and has lectured at such institutions as the National Gallery, Washington, DC; the Guggenheim Museum, New York; the Metropolitan Museum of Art; the Museum of Modern Art, New York; Tate Britain; the Ecole des Beaux-art, Paris; the Museum of Modern Art, Tokyo; and Glimmerglass Opera. Her exhibition, “Color as Field: American Painting 1950-1975,” organized for the American Federation of Arts, was seen on a year-long tour of the U.S. in 2008-2009. Ms. Wilkin is contributing editor, along with William C. Agee, of the Stuart Davis Catalogue Raisonnï¿½, Yale University Press, 2007. Her current projects include a Jules Olitski retrospective for the Houston Museum of Fine Arts and the Kemper Museum of Contemporary Art, Kansas City, (in collaboration with E.A. Carmean Jr) and touring exhibition, “The Four Musketeers of American Modernism: John Graham, Stuart Davis, Arshile Gorky, Willem de Koon ing and their Circle,” for the Addison Gallery of American Art, Philips Academy, Andover, MA, (in collaboration with William C. Agee and Irving Sandler). A monograph, Anthony Caro: Interior and Exterior, was published by Lund-Humphries, London, this spring, part of a five volume series on Caro, which Ms. Wilkin edited.
Whale & Star, The Studio of Enrique Martï¿½nez Celaya
2215 NW 1st Place
Miami, FL 33127
Ph: 305.576.6160
info@whaleandstar.com
www.whaleandstar.com
For more information about local openings and events, please visit www.miamiartguide.com