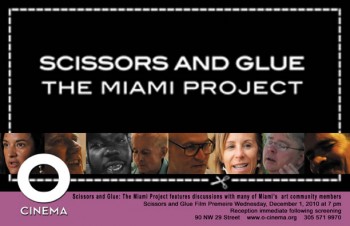 O Cinema, Miami’s HQ for independent film located at 90 NW 29th Street, is offering a sneak peek of its film & art center opening in 2011 with a week of special events, art exhibitions, and film screenings in conjunction with Art Week 2010 and in celebration of Art Basel.

The activities commence on Wednesday, December 1st at 7:30pm with a special work-in-progress screening of the documentary film “Scissors & Glue: The Miami Project”. This special ‘Basel cut’ of the film offers an overview of Miami’s spectacular art scene and features interviews with the leading figures in South Florida’s visual arts community. The screening will be followed by a Q&A with the filmmakers and a cocktail reception in the O Cinema patio. Additional screenings will be held daily thru Sunday, December 5th. All screenings are free and open to the public (See screening times below).

The life and work of iconic British fashion designer Barbara Hulanicki, will unfurl on-screen on Saturday, December 4th at 9:30pm in “Beyond Biba”, a documentary feature that explores the contributions made by Hulanicki to the worlds of fashion, interior design, and art. The screening is presented after the official opening of FLASH, a solo show of Barbara Hulanicki’s sketches presented at the Calix Gustav Gallery located next door to O Cinema. A repeat screening will be held on Sunday, December 5th at 6pm

In addition to film screenings and parties, O Cinema will explode with intriguing visual works by a variety of contemporary artists including two New York based artists- mixed-media street artist TMNK (aka Nobody) whose unique aesthetic, which has sold out shows throughout North America and Europe, is often compared to Basquiat and Picasso and mixed-media artist Sean Naftel whose ‘Free Art Stand’ offers free works of art by more than 200 contributors to anyone who wants them. The stand is a venue for a dialog surrounding how art is valued in the contemporary market place and how its assessed culturally. In addition, O Cinema’s year round resident artists Brazilian native Henrique Souza whose work centers around startling images created through digital photographic manipulation and abstract expressionist painter Nadim Tabsch, a Miami native, will both showcase new works in celebration of Miami Art Week.

Situated directly across the street from the Rubell Family Collection, O Cinema is a 5,000 square foot indie film house and visual arts center that was founded with a matching grant from the John S. and James L. Knight Foundation. Set to open in late December 2010, it will house 2 artist galleries, a art-centric boutique, South Florida’s only dedicated video art gallery, and a digital cinema auditorium that will seat 120 people and showcase cutting-edge works of independent, foreign, art and niche films.