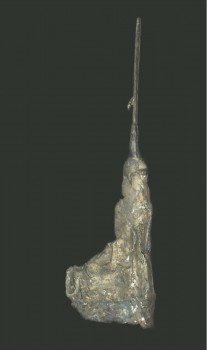 Edge Zones Art Center proudly presents Constructions, the second solo exhibition of Angel Vapor (La Havana, Cuba, 1970) at Edge Zones. The exhibition will open on October 9 and will run until November 6, 2010. The art critic Anne Tschida says of Vapor’s work ” whether it is sculpture, drawing, or painting, is at an elemental level about perspective and process: The process of construction, and by extension, about deconstruction — of objects, of space, of lives. Vapor continues to explore this process in his latest solo show at Edge Zones.

Vapor crafts his exquisite pieces out of bronze, clay, and oil paint, but in these constructions there is always a tension. That’s part of the beauty of his work; the materials and references are rigid and hard, but the ultimate result feels more fragile and fluid. Like in a delicate piece, a small sculpture made of bronze, where a disembodied arm protrudes from the wall — clearly a woman’s arm — and from her fingers hangs a bomb, but ever so tenuously, as it is only string that ties the two together. Life and death are hanging from a thread.

Strings attached to a hand reveal another aspect of process, that of the manipulator of lives and society. As an artist who was raised and educated within the tight political, physical, and emotional confines of the Cuban state, this part of the “construct” is never far from the surface. Sculptures positioned in vaguely military stances or movement, reflect another state in their facial composure — that of an inner detachment from this imposed outer structure.
Vapor plumbs the architecture of object and space, so he assembles his figurative works very precisely within the gallery setting. The placement and lighting of the artworks and their relationship to one another are critical to the overall perspective.

And like anything under construction, in these artworks something is left unformed — maybe a patch of surface area, or a foot. Like life, Vapor’s pieces are never static; there is a sense of movement created from the tensions within and the placement in their surroundings. In the end, New Constructions remind us of the true liberating power and beauty in art.”

Angel Vapor is a prolific artist whose works include paintings, sculptures, prints, public commissions and drawings. Vapor’s work has been exhibited internationally with critical reviews in El Nuevo Herald and is included in art books such as WET 2, (Edge Zones Press Miami). He studied at the National School of Visual Arts (ENAP), Havana, Cuba and at the Academy of Art, St. Alejandro (Habana, Cuba). His work has been frequently on display in galleries and cultural institution in and outside Miami, FL. There were solo exhibitions by his work in Jhoon Rhee Gallery, Washington, D.C., Ism, Gallery, Miami and in Carmen de la Guerra, Madrid, Spain. His commission pieces are on display in several places in the City of Miami, FL and in San Valentin, LeÃ³n, Spain.