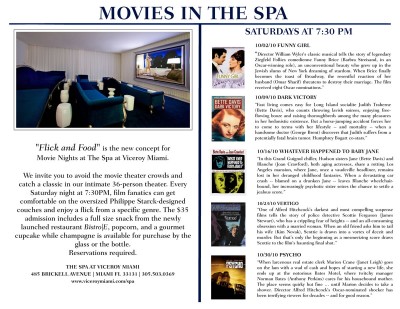 “Flick and Food” is the new concept for Movie Nights at The Spa at Viceroy Miami.
We invite you to avoid the movie theater crowds and catch a classic in our intimate 36-person theater.
Every Saturday night at 7:30PM, ï¬lm fanatics can get comfortable on the oversized Philippe Starck-designed couches and enjoy a ï¬‚ick from a speciï¬c genre.
The $35 admission includes a full size snack from the newly launched restaurant Bistro|E, popcorn, and a gourmet cupcake while champagne is available for purchase by the glass or the bottle.
Reservations required.
The Spa At Viceroy Miami 485 Brickell Avenue | Miami Fl 33131 | 305.503.0369 www.viceroymiami.com/spa

10/02/10 FUNNY GIRL â€œDirector William Wyler’s classic musical tells the story of legendary Ziegfeld Follies comedienne Fanny Brice (Barbra Streisand, in an Oscar-winning role), an unconventional beauty who grew up in the Jewish slums of New York dreaming of stardom. When Brice ï¬nally becomes the toast of Broadway, the resentful reaction of her husband (Omar Sharif) threatens to destroy their marriage. The ï¬lm received eight Oscar nominations.â€

10/09/10 DARK VICTORY â€œFast living comes easy for Long Island socialite Judith Traherne (Bette Davis), who counts throwing lavish soirees, enjoying free- ï¬‚owing booze and raising thoroughbreds among the many pleasures in her hedonistic existence. But a horse-jumping accident forces her to come to terms with her lifestyle — and mortality — when a handsome doctor (George Brent) discovers that Judith suffers from a potentially fatal brain tumor. Humphrey Bogart co-stars.â€

10/23/10 VERTIGO â€œOne of Alfred Hitchcock’s darkest and most compelling suspense ï¬lms tells the story of police detective Scottie Ferguson (James Stewart), who has a crippling fear of heights — and an all-consuming obsession with a married woman. When an old friend asks him to tail his wife (Kim Novak), Scottie is drawn into a vortex of deceit and murder. But that’s only the beginning as a mesmerizing score draws Scottie to the ï¬lm’s haunting ï¬nal shot.â€

10/30/10 PSYCHO â€œWhen larcenous real estate clerk Marion Crane (Janet Leigh) goes on the lam with a wad of cash and hopes of starting a new life, she ends up at the notorious Bates Motel, where twitchy manager Norman Bates (Anthony Perkins) cares for his housebound mother. The place seems quirky but ï¬ne â€¦ until Marion decides to take a shower. Director Alfred Hitchcock’s Oscar-nominated shocker has been terrifying viewers for decades — and for good reason.â€