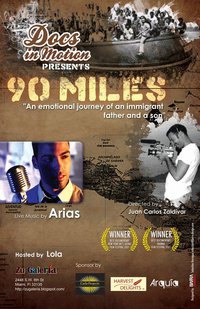 Zu GalerÃ­a Fine Arts and Docs in Motion cordially invite you to experience a night with documentary filmmaker Juan Carlos ZaldÃ­var and his film 90 Miles, as part of our month long celebration of the 30th Anniversary of the Mariel Boatlift!

Juan Carlos ZaldÃ­var, Director/Producer
Born in a town outside Havana, ZaldÃ­var was a teenager when he came to the U.S. with his family during the Mariel boatlift in 1980. He earned a BFA and MFA in film studies at New York University’s Tisch School of the Arts and subsequently taught there. His thesis film, “The Story of the Red Rose,” premiered at the Sundance Film Festival, where he was invited as a juror, and he became a Fellow of the Writers’ Lab in 1998. ZaldÃ­var’s second short, “Palingenesis,” was nominated for a Student Academy Award. Currently residing in Miami, ZaldÃ­var is a member of the National Association of Latino Independent Producers and the director and programmer of Miami’s first Documentary Film Festival, entitled “The Florida Room.”