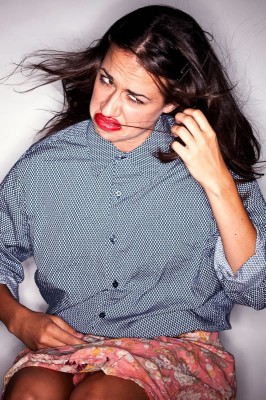 The Area Stage Company is proud to announce “Miranda Sings” Miami debut! International superstar Miranda Sings has been performing her one woman cabaret show to sold-out audiences since last spring when her Youtube channel went viral. Her hilarious shows consist of singing hit songs, onstage voice lessons, fashion makeovers, and dramatic readings of hate mail. You will not want to miss seeing this lipstick-wearing, epileptic-eye browed, crooked smiling beauty live! The show will also be hosted by Broadway actor AARON SIMON GROSS (original cast member member of the Broadway production “13”.) In addition, Miranda will give a singing lesson to the cast leads of the up and coming Area Stage Conservatory production of “Cabaret.”

Call Now For Reservations 305-666-2078 or visit our website at www.areastagecompany.com

WHO IS MIRANDA?
The creator of Miranda is a classically trained singer and actress named Colleen Ballinger. Her character is a satire of common YouTube videos featuring mediocre or even bad singers who film themselves singing as a form of self-promotion. Miranda sings comically off-key,
and, when confronted by viewers who take the videos seriously, uses the catchphrase “Haters back off!”. Ms. Ballinger’s character has enjoyed widespread popularity, particularly among musical theatre fans, and has recently appeared as Miranda Sings at live club and theater venues in New York, Los Angeles, San Francisco, Salt Lake City, London, and Australia. Special guests have included the casts of Mamma Mia, Billy Elliott, Bye Bye Birdie, Rock of Ages, Jersey Boys, Shrek, Ann Hampton Callaway, Shoshana Bean, Daniel Reichard, Seth Rudetsky, Christopher Sieber, and Scott Alan.

“Spastic vocalist Miranda Sings has become one of the Internet’s biggest stars, and sold out venues in Los Angeles, New York, and
London!”
– BroadwayWorld

“Miranda Sings is the hottest, freshest and oddest breakout star in the musical theatre/cabaret scene!”
– the rrazz room, San Francisco

“I can’t walk anywhere without someone asking me if I’ve seen the Miranda videos!”
– Jason Robert Brown