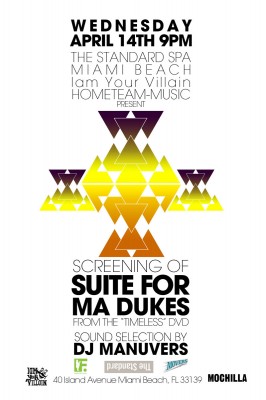 IAmYourVillain, with Hometeam-Music, presents a screening of “Suite for Ma Dukes” produced by Mochilla in honor of the release of the Timeless Concert Series 3 DVD box set release.
“Timeless: The Composer/Arranger Series” is the name of a concert series that was created in homage to the composer/arrangers who have influenced hip-hop in the most literal and profound ways. Timeless was conceived by production house Mochilla in Los Angeles during February and March 2009 and included the performances of over 150 musicians in front of ecstatic sold out crowds. These three historic events were recorded and filmed in exacting detail with Mochilla’s unmistakable style.
“Suite for Ma Dukes” is the second DVD of the series celebrating the music of producer, J Dilla. Composed and arranged for a 60 piece Orchestra by Miguel Atwood-Ferguson feat. special guests Bilal, Dwele, Posdnuos, Talib Kweli and more. This premiere performance is still on the minds of many. Mixed and mastered by legendary Grammy award winning producer/mixer, Bob Power. The man behind hundreds of pop and jazz recordings for such artists as Erykah Badu, D’Angelo, De La Soul and A Tribe Called Quest and more, he had also worked with Dilla while he was alive. Hip hop has never sounded or looked like this, welcome to a new era, a new scale and a new sound. Part of the proceeds of all Suite for Ma Dukes performances and recordings will go towards Maureen “Ma Dukes” Yancey and the heirs to the Dilla Estate.
The screening takes place on Wednesday, April 14th, 2010 at The Standard Spa Miami Beach (located at 40 Island Avenue, Miami Beach, FL 33139) starting at 9:00PM.
Click here for more information on the Timeless Series.