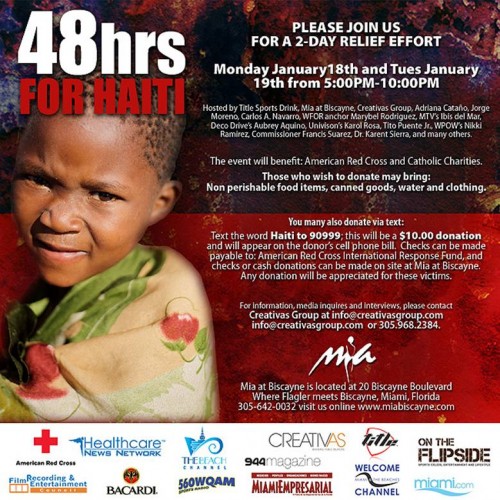 (Miami, FL) January 13, 2009â€” The world over has been shaken by what has taken place in Haiti this week. The earthquake that took place a day ago has already claimed innumerable lives and changed that of thousands who have been affected. With many still unaccounted for and various in need of the basics in order to survive, South Florida community leaders, and Miami based brands such as Title Sports Drink and Miami.com, have come together to raise awareness and assistance for our neighbors in Haiti. The two day relief effort titled â€œ48 Hours for Haitiâ€ will take place Monday January 18 and 19, 2010 from 5:00PM-10:00PM each day.

Title Sports Drink president Kevin Sepe organized the effort along with Miami.com at Mia at Biscayne, a great location in the heart of Downtown Miami. Other supporters include: Healthcare News Network, WQAM, 944 Magazine, Bacardi, The Beach Channel, Film Recording Entertainment Council, Welcome Channel, Fabulous Miami, The Event Firm, associate publisher Michele Addison of Ocean Drive Magazine and a slew of gracious community leaders who will be onsite during this 48-hour window.

The event will benefit two entities, American Red Cross and Catholic Charities. Checks can be made payable to: American Red Cross International Response Fund, and checks or cash donations can be made on site at Mia at Biscayne. Those who wish to donate non perishable food items, canned goods, water and clothing can do so at the venue as well both days which will be donated to Catholic Charities benefitting the earthquake victims.

Mia at Biscayne is located at 20 Biscayne Boulevard where Flagler meets Biscayne, Miami, Florida, and 305-642-0032. All supporters who attend will also be able to text the word Haiti to 90999; this will be a $10.00 donation and will appear on the donorâ€™s cell phone bill. This will appear on screens throughout the event.

For information, media inquires and interviews, please contact Creativas Group at info@creativasgroup.com or 305.968.2384.