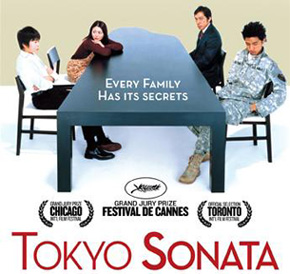 Set in contemporary Tokyo, Tokyo sonata is a story of an ordinary Japanese family of four. The father, Ryuhei Sasaki, like any other Japanese businessman, is faithfully devoted to his work. His wife, Megumi, left on her own to manage the house, struggles to retain a bond with her oldest son in college, Takashi, and the youngest, Kenji, a sensitive boy in elementary school. From the exterior the family is seemingly normal, save for the tiny schisms that exist within.
In Japanese with English subtitles.
WINNER: Cannes Film Festival Un Certain Regard Jury Prize
Mara del Plata Film Festival Best Director
Kinema Jumpo Awards Best Actress, Best New Actor
â€œMIRACULOUS!â€-The New Yorker
â€œBRILLIANTLY DIRECTED… an impressive piece of filmmaking.. further proof of Kurosawa’s assured, deliberate artistry.â€-Indiewire
For tickets