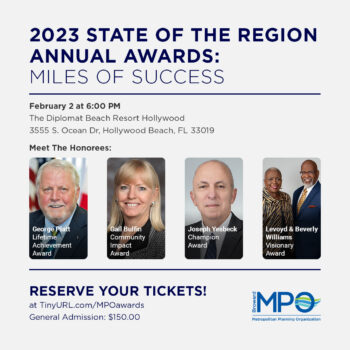 Broward Metropolitan Planning Organization will celebrate the impact of its significant role to plan and direct transportation and infrastructure projects throughout the region and honor those who advocate for smart planning and connectivity during the second State of the Region Annual Awards to take place from 6 p.m. to 9 p.m. on Thursday, February 2, at The Diplomat Beach Resort Hollywood (3555 South Ocean Drive). WPLG-TV Local 10 Anchor Glenna Milberg and comedian Tane Danger have been tapped to co-host this prominent event, coinciding with the Safe Streets Summit, which is presented by the Broward MPO and local partners. This year’s distinguished honorees are George Platt (Lifetime Achievement Award), Gail Bulfin (Community Impact Award), Beverly and Levoyd Williams (Visionary Award), and Joseph Yesbeck (Champion Award).

Attendees to this year’s State of the Region Annual Awards will enjoy the transportation wit and wisdom of Tane Danger. A professional improv comedian with a master’s in public policy, Danger serves as director of the Westminster Town Hall Forum – the Upper Midwest’s largest and most prestigious speaker series. For more than a decade, Danger has hosted the nationally renowned civics-inspired improv comedy show, The Theater of Public Policy. At each show, he interviews newsmakers, policy-wonks, and big thinkers on issues ranging from race in education to the farm bill. Then, the show’s cast of improvisers takes everything that’s been said and turns it into entirely unscripted improv comedy theater. In his own workshops and keynote talks, Danger uses his background in improv comedy to get folks to practice communication, collaboration, and creativity differently. He’s taught improv for better communication to everyone from healthcare executives to Lutheran bishops. He is a regular contributor to Almanac, the weekly public affairs program on Twin Cities Public Television but may be best known as “the bus guy!” In 2019, Danger began working with Metro Transit on a web series called, “Hey! Where Does This Bus Go?” In each episode, he rides a local bus route from start to finish, noting landmarks along the way and chatting with riders. The series demystifies each bus route and changes people’s perception of who rides the bus.

Awards dinner tickets are $150 per person; tables of 10 are available. To reserve tickets, please visit https://bit.ly/BrowardMPOSOTRAwards2023.