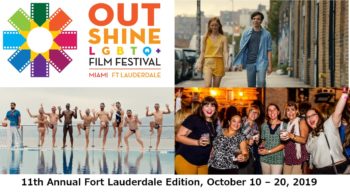 The festival kicks-off with an October 10 Opening Night showing of the comedy “Adam,” directed by Rhys Ernst, at 7 p.m. at the Museum of Discovery & Science AutoNation® IMAX 3D Theater. This lively coming of age comedy of errors follows a young high-schooler as he navigates life, love and Brooklyn’s young LGBTQ+ community. Producer Circle Members and sponsors will enjoy a 5:30 p.m. pre-event Filmmakers Soirée where they can mix and mingle with many of the festival’s filmmakers followed by the screening. Post-showing, the Opening Night Party will be at Stache (109 SW 2nd Ave, Fort Lauderdale) with cocktails, hors d’oeuvres, and entertainment.

This year, the OUTshine LGBTQ+ Film Festival Fort Lauderdale is also pleased to host “And Then We Danced,” directed by Levan Akin of Sweden and up for consideration as best international feature for an Academy Award, as its closing film on October 20 at 8 p.m. at Savor Cinema. This uniquely tender and personal film follows talented dancer Merab as he struggles with a forbidden sexual attraction that recalls “Moonlight” and “God’s Own Country.” An afterparty and awards ceremony will follow at Nu River Landing (511 SE 5th Ave, Fort Lauderdale).