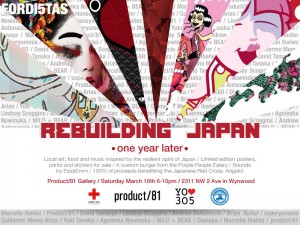 On March 11, in the Japanese resort town of Minamisanriku, four generations of the Sato family will break out the cake and ice cream to celebrate the first birthday of what grandmother Kazuko calls the â€œchild [that] was born to save us.â€ Down the coast, in Ishinomaki, Osaka artist Yuki Amano will be painting even more of her hometownâ€™s shopfronts in bright, vibrant colors. Meanwhile Miyagi Governor Yoshihiro Murai, whose prefecture includes Yukiâ€™s birthplace, will be finalizing plans to visit Taiwan, South Korea and China.

The Satos will try to ignore for a moment the boat that remains perched atop a nearby five-story building; young Yuki will likewise not worry that the ground around her own familyâ€™s home is still a full two meters lower than it used to be; and the governor will attempt to put a good face on the fact that his role is now nothing more than â€œtop [traveling] salesmanâ€. But try as each of these spirited souls might, neither they — nor any of the thousands upon thousands like them — will truly be able to forget the devastating damage done by the Great East Japan Earthquake of 2011, largely because even one year on the rebuilding remains undone.

To help shed light on the matter and raise funds for the still stricken nation, Product/81 and South Florida Ford are combining forces with 13 well-known Miami artists for a commemorative event called Rebuilding Japan: One Year Later.

Consisting of the artistsâ€™ original posters, in addition to limited edition 8x10s, Rebuilding Japan will also feature DJs Ess & Emm, the Purple People Eatery food truck (whoâ€™ve created a custom Mini Tuna Wakame Burger for the occasion), and the photography of Pamela Wasabi (whose Wasabi Fashion Kult takes much of its inspiration from Japanese culture). All of the artworks will be for sale during the event, and 100% of the proceeds will go to the Japanese Red Cross.

Product/81, a creative lab in the Wynwood Arts District, has deep personal and cultural ties to Japan, and, through their partnerships with South Florida Ford, a history of involvement in philanthropic projects throughout the community.

â€œWe feel passionate about the recovery efforts,â€ said Product/81â€™s Joel Fernandez, â€œand, even a year later, it is essential that we continue to support Japan in their time of need.â€