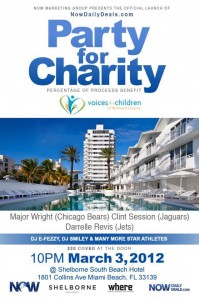 NOWDailyDeals.com is a one of a kind online deal engine with a cause and celebrity twist. It is designed to allow everyday people to enjoy the nightlife (in their city) while supporting a charity. Customers receive deals on venue admissions, VIP tables/bottle service, beverages, dining and more. A percentage of monthly deal sales are then donated to the featured non-profit organization or celebrity athlete charity of the month.