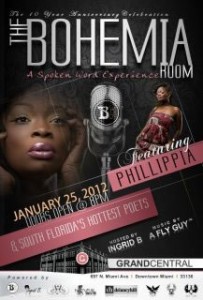 Ingrid â€œBâ€ Bazin was named one of the 100 Creatives Cultural Superhero s in 2010. Orchestrating a quiet revolution within the spoken word community, she was also the poet producer of Lyric Cafe TV. â€œ I am grateful for the support that The Bohemia Room receives weekly locally and nationally. We are committed to providing a space and platform for local and visiting talent to express themselves and bring awareness to the positive aspects of spoken-wordâ€. “We look forward to continuing to grow this portal for spoken word and soul music;” states Ingrid ‘B’.

The Bohemia Room has caught the eye of quite a few tastemakers that visit South Florida. Guest DJâ€™s like rising star DJ M-Squared to notable attendees like Kyle Grooms, Tracy Mourning, actor/producer Lamman Rucker, Dr. Benjamin Chavis, Tony Rock, Guy Torry and Macy Gray have all attend and were are impressed and inspired by their experience.