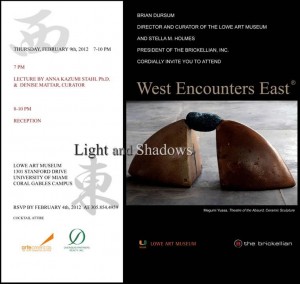 West Encounters East (WEE) is a project that rethinks the significance of cultural exchange, emigration, ethnicity and diversity by identifying and engaging emerging and established Latin American artists of Asian heritage.

Writer Anna Kazumi Stahl, Ph.D., will speak on “The Japanese Beauty of Shadows,” addressing the Japanese cultural aesthetic as it relates to light and dark.