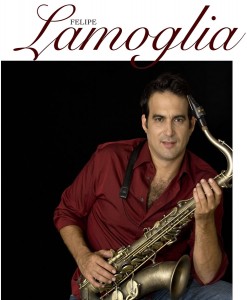 Felipe Lamoglia is a Grammy-winning artist, saxophonist, composer and arranger. Born and educated in Cuba, he studied at the Superior Institute of Art (ISA). By the age of 18 he was a member of Cubaâ€™s acclaimed band, NG La Banda. In 1992 he moved to Brazil where he lived for seven years, absorbing the countryâ€™s musical and spiritual wealth and playing with great artists. In 2001 he began playing with Arturo Sandoval, performing all over the world and recording diverse albums and DVDs, including all the arrangements and the co-production of â€œRumba Palaceâ€ a Grammy Winner album. He joined Gonzalo Rubalcaba in 2004, recording his album, Paseoâ€, also nominated to Latin Grammys in 2006 and touring Europe with â€œThe New Cuban Quartetâ€.

Felipe has shared the stage with musical giants such as Herbie Hancock, Michael Brecker, Wynton Marsalis, Conrad Herwick, Ignacio Berroa, Paquito Dâ€™Rivera, and many others.

In addition to Arts Centers and Festivals performed all over the world and in USA, Mr Lamoglia is bringing all this experience to IRESOUNDS which comes from an extended mixture of folklores including Afro-Cuban roots, Brazilian rhythms and Contemporary Jazz, resulting in a mix of Jazz, Beats and Clave.

All Afro-Cuban music and the majority of Latin jazz is rooted in a basic rhythm called clave, which developed out of the rhythms brought to the Caribbean by Africans during the slave trade.

With Iresounds you are welcome to delight the essence of Afro-Cuban Jazz music and the basic clave rhythms like Guaguanco, Rumba and Bolero but with a complete different modern view, still up to dance and full of improvisation and versatile creativity.