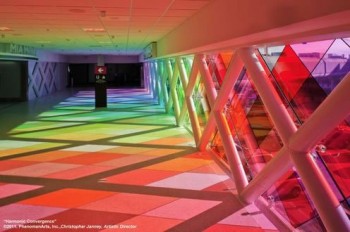 – Also, Janneyâ€™s Architecture of the Air Exhibition to be on View in The Miami Design District from November 29-December 4, 2011

Harmonic Convergence features a 72-foot-long window wall with diamond-shaped panes of colored glass in front of a white structural steel â€œX-Bracingâ€ frame. With a palette of over 150 transparent colors, Janney has created a gradually changing pattern ranging from deep reds to bright violets, similar to a rainbow.

The project is part of Miami-Dade Countyâ€™s Art in Public Places program and is located in the passenger connector walkway that is the entrance into the airport from the new the â€œMIA Moverâ€ automated transit system. As travelers enter the space, they will hear a complex set of sounds Janney recorded during trips to the Florida Everglades, scuba dives in the ocean, and other natural environments of South Florida. In addition, two video cameras installed in the ceiling feed information to the computer regarding the pedestrian activity within the space, influencing the density of the sound-score. At the top of each hour, a short composition with percussion instruments plays, marking the time of day.

â€œThis is my fifth project in South Florida,â€ Janney states. â€œIt is one of my favorite places in the world. I love the sounds of the subtropics most particularly the Everglades, the ocean shore and underwater sounds, especially sounds both real, as in whales and porpoises, and imagined, i.e. mermaids and Atlantis.

Harmonic Convergence is a replacement for Janneyâ€™s 1997 airport commission Harmonic Runway, which was removed from Concourse A after changes to the airport occurred due to 9/11 security. That former artwork had become an icon of South Florida, featured in numerous magazines and on film including the Harrison Ford feature, â€œRandom Heartsâ€ and the Nicholas Cage film, â€œ8MM.â€

In addition, Architecture of the Air, a traveling exhibition about Janneyâ€™s work will be on view in the Miami Design District at 4040 NE 2nd Avenue from November 29-December 4, 2011. The exhibit highlights projects from Janneyâ€™s three principal areas of focus: â€œUrban Musical Instrumentsâ€, â€œPhysical Musicâ€, and â€œPerformance Architecture.â€ It explores his concept of total immersion through models, photographs, drawings, video, and a site-specific piece “Touch My Building: Miami.”

In conjunction with the exhibition, three exciting events will be held at the exhibition space. On Friday, December 2 at 9 pm, Janney will present a concert of studio music entitled â€œDisembodied Instruments (Dance Version).â€ Performers include members of the A cappella group The Persuasions along with a group of special musicians from Boston and New York. On Saturday, December 3 at 3 pm, a panel discussion moderated by renowned Miami art/architecture critic Beth Dunlop with Janney, and fellow artists Vito Acconci and Gustavo Metamoros, will discuss contemporary issues related to art, architecture and sound. On Saturday night there will be a screening of Janneyâ€™s recent film â€œWhat is a Heart?â€ which has been called a â€œmeditation on creativity and mortalityâ€ with performance clips by Mikhail Baryshnikov and Sara Rudner (Twyla Tharp Dance). The evening will open with a live set by The Persuasions, who also perform in the movie, singing music specially arranged for the occasion by Janney. The evening will close with music by L.A.-based band Y LUV, which features Janneyâ€™s son, Freddy, who also appears in the film.

Trained as an architect and jazz musician, Janney is an American artist whose work explores the relationships between sound and architecture, often-transforming otherwise ordinary spaces into â€œhyper-realityâ€ environments.
Educated at Princeton University and the Massachusetts Institute of Technology, Janney has explored the intersection of architecture and music for over thirty years, creating temporary and permanent installations throughout the United States and Europe. Sometimes he tries making architecture more like music as in his Soundstair on the Spanish Steps in Rome and Sonic Forest at the Bonnaroo and Glastonbury Music Festivals. At other times, he has attempted to make music more like architecture as in his HeartBeat performances. He is well known to Miami sports fans for his Turn Up the Heat interactive â€œanemoneâ€ scoreboard created for the Miami Heatâ€™s American Airlines Arena.