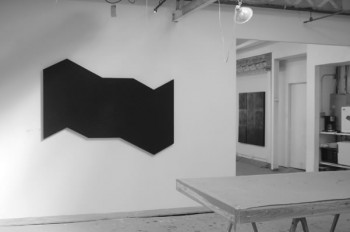 Charest-Weinberg is pleased to present â€œBlack Sculpture,â€ an exhibition of new work by New York-based artist Fernando Mastrangelo. The exhibition will open to the public on Tuesday, November 29th and will be on view through February 29th, 2012. There will be an opening reception on November 29th from 6-8pm.

Mastrangelo approaches sculpture as a communion of concept, form and materials. Over the years, he has become known for using unexpected materials that heighten his work’s critical effect. Avarice, 2008, is based on the Aztec calendar, made entirely from white Mexican corn, and critiques NAFTA and the U.S. corn farming institution. Felix, 2009, is a life-size statue of a Colombian coca farmer cast from pure cocaine. Following that, he spent a year in Los Angeles, documenting the El Salvadorian gang MS-13 and casting relief sculptures based on their tattoos from human ash. This oeuvre is much more than a laundry list of Hispanic social problems; it represents art at once socially responsible and aesthetically formidable. It comes as no surprise that Mastrangelo was an assistant for Matthew Barney from 2004-2005. But whereas the older artist used materials metaphorically in order to create an esoteric cosmology of meaning, Mastrangelo remains conceptually and materialistically literal.

For â€œBlack Sculpture,â€ Mastrangelo focuses on art history for the first time. After creating exact molds based on the work of Frank Stella and Ad Reinhardt, Mastrangelo casts his reliefs out of compacted gunpowder. The pieces teeter on the precipice of annihilation; by forging the work of canonical artists in gunpowder, Mastrangelo simultaneously pays homage to the work of earlier iconoclasts and seeks to destroy them for himself. â€œBlack Sculptureâ€ takes on previous Oedipal crises, such as Rauschenbergâ€™s Erased De Kooning, 1953, and adds an element of contemporary spectacle. Yet the pieces are not simply bombastic; they are firmly embedded in recent narratives-both the modernist quest for reduction and a knowing appreciation for appropriation and found imagery. Furthermore, submerged beneath the tense potential for destruction is an elegiac calm. They give form to the Existential angst that inspired their Cold War-era predecessors. Ad Reinhardt once said, â€œI am sure external agony does not enter very importantly into the agony of our painting.â€ The black gunpowder, coupled with the Reinhardtâ€™s cruciform and Stellaâ€™s teleological line work, firmly suggests an end of something.

Fernando Mastrangelo received an MFA in Sculpture from Virginia Commonwealth University in 2004. He has exhibited internationally, and is in the permanent collection of the Brooklyn Museum. â€œBlack Sculptureâ€ is his first solo exhibition with Charest-Weinberg.