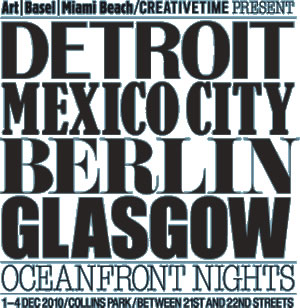 This year, Art Basel Miami Beach hosts a nightly program at the Oceanfront, organized by Creative Time, sited in an environment designed by Phu Hoang Office and Rachely Rotem Studio. The pavilion uses two types of rope â€“ reflective and phosphorescent â€“ to create a diverse and interactive environment of open-air structures that sway and glow in the night.

The 2010 Oceanfront Nights program features four cities at the forefront of todayâ€™s artistic experimentation and cross-disciplinary collaboration: Detroit, Mexico City, Berlin, and Glasgow. From December 1 to December 4, each night will spotlight one city with film, music, video, performance and more. Art Basel Miami Beach and Creative Time invited four organizations to partner on creating the program – the Museum of Contemporary Art in Detroit, Museo Tamayo in Mexico City, 032c in Berlin, and Tramway in Glasgow.