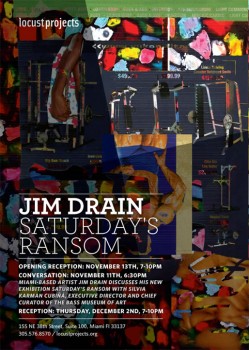 Locust Projects is pleased to present Saturday’s Ransom, an ambitious new project by Miami-based artist Jim Drain. Drain is the 2005 winner of the prestigious Baloise Art Prize, and has exhibited work at institutions and galleries across the United States and internationally. This will be his first major solo exhibition in Miami.

Drain, who is known for making colorful mixed-media works that merge psychedelic formalism with elements from art history and pop culture, will create a new series of sculptures and works on paper.

Saturday’s Ransom is a reflection on the vehicles of transcendence, drawing specifically from the artistâ€™s experiences as a youth with Catholicism. Drain will transform Locust Projects’ window facade into a faux stained glass window composed of translucent drawings created from melted wax and found books. Saturday’s Ransom will also feature sculpture collaging materials including knit fabric, painted cedar and welded furniture. The combination of these disparate materials obscures the cultural style that each element standing alone would otherwise convey, and instead coalesces them into a new and distinct whole. Together, the works speak to the history of Modernism, borrowing from early Christian symbology as well as African and Middle Eastern sources.

Born in Cleveland, Ohio in 1975. Jim Drain studied at Rhode Island School of Design. The artist lives and works in Miami, Florida. Solo exhibitions include I Will Show You the Joy-Woe Man, Workspace at the Blanton Museum, University of Texas, Austin, 2009; and I Would Gnaw On My Hand, Greene Naftali Gallery, New York, 2007. In 2009, the artist participated in group exhibitions at the Depart Foundation in Rome, Italy; Deitch Projects in Long Island City, New York; Museum of Contemporary Art in North Miami, Florida; and Turner Contemporary in Margate, England. Drain’s work was also featured in the international exhibition Uncertain States of America, curated by Daniel Birnbaum, Hans Ulrich Obrist and Gunnar Kvaran, 2006; and the 2002 Whitney Biennial at Whitney Museum of American Art, New York.