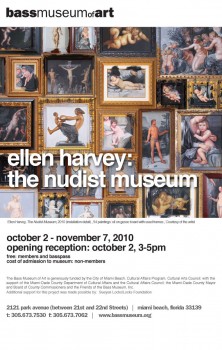 The Bass Museum of Art is pleased to present The Nudist Museum by Ellen Harvey.
harvey showcases nudes that represent purity, titillation, truth, comedy, beauty, love and ugliness as well as simple representations of the human body. october 2 – november 7, 2010

The Bass Museum of Art is pleased to present The Nudist Museum by Ellen Harvey.
Ellen Harveyâ€™s Nudist Museum uses the Bass Museumâ€™s collection to reveal a wide variety of different historical paradigms of nudity. By copying every nude in the collection, which includes paintings, drawings and sculptures from the Middles Ages to the present, Harvey showcases nudes that represent purity, titillation, truth, comedy, beauty, love and ugliness, as well as simple representations of the human body. The fifty-four resulting paintings are far from exact copies. The nudes were copied from the museumâ€™s documentation rather than from the originals, with the result that the level of detail in each painting strongly reflects the resolution of the source documentation. The images were also cropped to accentuate the nudes and Harvey chose to paint everything other than the human body in monochrome. For sculptures and drawings, Harvey randomly assigned flesh colors to the bodies depicted. The ornate second-hand frames have been painted so that the paintings appear to be spilling out of the canvas, alerting the viewer to the fact that the apparently conventional salon-style installation of old paintings is not what it seems. Similarly, upon closer inspection, the wallpaper behind the paintings can be seen to contain small examples of nudity found in todayâ€™s mass media, creating a humorous contrast between the world-views of the paintings and that of the world in which we live. The project is a continuation of a recent series of exhibitions in which Harvey redefines different gallery and museum spaces at the same time that she challenges the audienceâ€™s perception and understanding of the artworks that occupy such spaces.
The Nudist Museum will be on view October 2 â€“ November 7, 2010 with an opening reception on October 2 from 3-5pm. Free to members and basspass and cost of admission to the museum for non-members.

Ellen Harvey was born in the United Kingdom and lives and works in Brooklyn, NY. Her work began to gather attention over a decade ago, when she â€œtaggedâ€ graffiti sites around New York City with small oval oil landscapes for The New York Beautification Project, which was subsequently published as a book by Gregory Miller & Co. Her work has since been the subject of numerous publications and periodicals. She has exhibited extensively in the U.S. and internationally and was featured in the 2008 Whitney Biennial. Her most recent solo exhibitions were Picturesque Pictures at Galerie Gebruder Lehmann and The Doppleganger Collections at Galerie Magnus Muller in Berlin, Germany. She is represented by Locks Gallery in Philadelphia, Stephan Stoyanov Gallery in New York, Meesendeclerq Gallery in Brussels, Belgium, Galerie Gebruder Lehmann and Galerie Magnus Muller in Berlin, Germany.

Located in Miami Beach, the Bass Museum of Art offers a dynamic year-round calendar of exhibitions presenting contemporary art as well as works of art from its collection of Renaissance and Baroque paintings, sculpture and textiles. In April 2010, the museum opened its Egyptian Gallery, the only Egyptian Gallery in Florida. Artistâ€™s projects, educational programs, lectures, concerts and free family days complement the works on view.