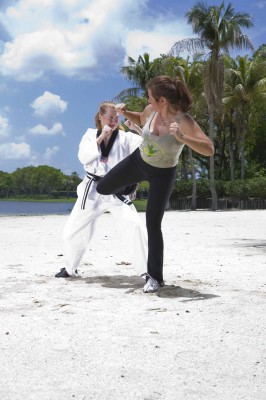 Fight Like a Girl: Womenâ€™s self defenses classes being held in October in light of October as Domestic Violence Awareness Month.

Statistics show that 31 million crimes are reported annually in the United States: that’s about one crime per second. In an effort to empower women and teach them to fight back against crime, The Center for Medical Weight Loss at University Drive is hosting two womenâ€™s self defense classes in October. The $10 classes are open to the public and take place from 6:30 p.m. to 8 p.m. on Monday, October 4th and Thursday, October 21st in honor of Domestic Violence Awareness Month in October. All proceeds go to benefit Women in Distress of Broward County.

The Centerâ€™s martial arts instructor, Michelle Straka, is a second degree black belt who trained for 15 years under the Grand Master Sung Wuk Chung, a world champion and ninth degree black belt. Straka will teach personal safety focused on awareness, prevention and self-realization of oneâ€™s physical power. Women will be taught key moves such as the palm heel strike, elbow jab and how to use whatâ€™s in hand as a weapon including an umbrella, car keys, hand bag, cell phone or pen. As well as learning defense techniques, participants will also receive a great motivational workout empowering the mind and the body.

â€œMost people who are victimized never imagined that crime would happen to them,â€ explains Gabriela Rosenthal, a weight loss specialist with the Center. â€œOnly about 10 percent of self-defense is actually physical. The best defense is just being aware of your surroundings and taking preventive measures which we will teach in our complimentary workshop.â€