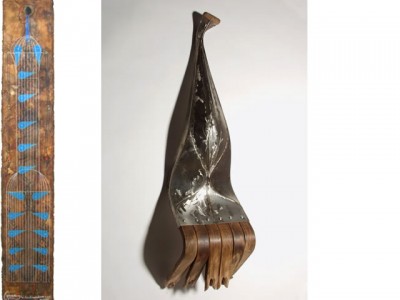 Pan American Arts Projects presents new works by Carlos Estevez. In the upcoming exhibition, Oblivion, Estevez continues to reflect on and reference Philosophy, Christian Art, Baroque Sculpture, sacred texts and poetry, and hybrid images of animal and human bodies. Nevertheless, the artist particularly focuses on the evolution of the everyday experience of life, and how the paths that have led us to where we are, are often paved by massacre and devastation. Carlos’ images breathe consciousness back into the psyche, making the viewer realize the history of disparaging traditions that run deep within the soul, self, and mind.

Carlos’ career has been marked by much success and praise in the past two years. Amongst the many acclaims received was a special mention in The Wall Street Journal as one of the most important emerging Cuban artists of this decade. In early 2010 Carlos’ work was acquired as part of the permanent collection of the Museum of Fine Arts in Boston. Furthermore, The University of Buffalo held the first retrospective of Estevez’s work, Images of the Thought. The show ran from November 5th 2009 – February 13th 2010. Jorge J.E. Gracia, University of Buffalo professor of Philosophy, published a book in conjunction with the exhibition, titled Images of Thought: Philosophical Interpretations of Carlos Estevez’s Art which utilized images of the artist’s work to illustrate philosophical tenants.
Project Room – Carlos Gonzalez: New Works
Carlos Gonzalez’s latest series continues to draw inspiration from nature. His pieces are advanced plant-like mechanism that morph into exploding pods. Like floating Dandelions, his sculptures give the sensation of ease and weightlessness, juxtaposing their strong metallic appearance. Gonzalez’s oeuvre reflects on the evolutionary processes of survival, highlighting the ingenuity of life on Earth.
Both artists will be present at the opening reception, to be held during Wynwood Gallery Walk: Saturday September 11th, 2010 from 7:00 – 10:00 p.m.
www.panamericanart.com
For more information about local openings and events, please visit www.miamiartguide.com