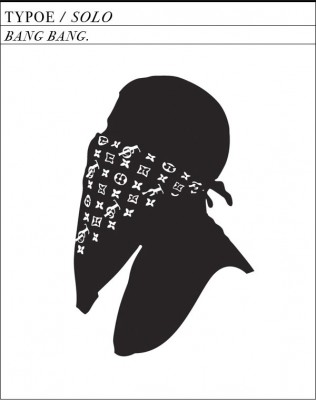 Cast between worlds of opposing values, at once an anonymous prestidigitator and high-ranking glitterati, TYPOE straddles an unseen fence. His handiwork, which swaths billboards, public arenas, and buildings literally rotting with neglect, has expanded from the crumbling edifice of a cultural misnomer into the social spotlight. By nature a commenter, a heckler, his self-referential styling’s are violent and poetic in equal measure. Illuminating parodies between gang relations and organized religion, corporations and the massacre of war, TYPOE’s mixed media creations range from factory finished luxury items and graphics to vandalized found objects that flaunt a punk-like disregard for beauty. Simmering for the moment under the lid of ‘the gallery’, “BANG BANG.” is where these fetishistic, narcissistic articles resonate with devastating potential and beget insurgent thoughts.