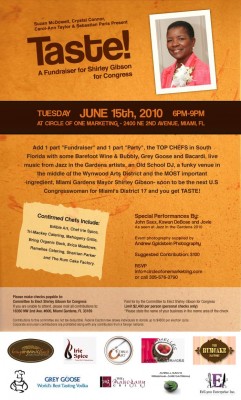 Add 1 part â€œFundraiserâ€ and 1 part â€œpartyâ€, the TOP CHEFS in South Florida preparing their signature dishes, some Barefoot Wine & Bubbly, Grey Goose and Bacardi, live music from Jazz in the Gardens artists, an old School DJ, a funky venue in the middle of Wynwood Arts District and the MOST important ingredient, Miami Gardens Mayor Shirley Gibson â€“ soon to be the next U.S. Congresswoman for Miamiâ€™s District 17…..and you get TASTE!

All contributions will directly support the Shirley Gibson for Congress Campaign. Suggested contribution is $100.00

Gibson is a candidate for Floridaâ€™s 17th Congressional District seat. She has a diverse background in the public and non-profit sector. She is the President of the Miami Dade League of Cities, a retired sixteen year Miami-Dade Police Officer, a previous business owner for more than fifteen years, and an agile community organizer. She is a skilled negotiator, using a collaborative approach to incorporate diversity, inclusiveness, and responsibility to secure effective outcomes. For the last seven years Gibson has served as the first mayor of the third largest municipality of Miami-Dade County and the largest predominantly Black city in Florida, the City of Miami Gardens. She was reelected, unopposed, to a second term in 2008.

{Please remember that Soul Of Miami is non-political, we just list the parties!}