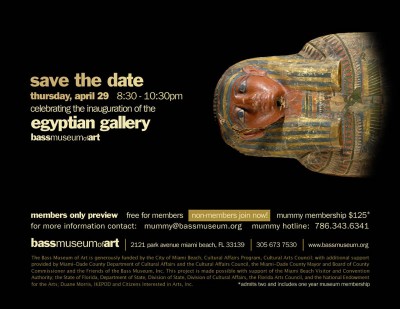 Visitors to the Bass Museum of Art will soon be able to experience the ancient world. On Thursday, April 29, the museum will inaugurate the only Egyptian Gallery and mummy in Florida at their members-only premiere event, A Night at the Museum. The evening features informal curator-led tours by Bass Museumâ€™s Executive Director Silvia CubiÃ±a and Brooklyn Museumâ€™s Egyptologist and special exhibition curator, Dr. Edward Bleiberg. Membership costs $125 and admits two to this private opening event.

Guests will enjoy cocktails by GREY GOOSE vodka and Bervini Prosecco with special desserts from Stellaâ€™s Sweet Shoppe. There will be raffle prizes, including an Ikepod: Marc Newson Solaris and Art Basel Miami Beach VIP Package.

The gallery offers an opportunity to learn about one of the worldâ€™s oldest and most mysterious civilizations from its surviving objects, and will showcase sarcophagi, mummy and 13 objects of Egyptian antiquity on long-term loan from the Brooklyn Museum, Lowe Art Museum and individualsâ€™ private collections. 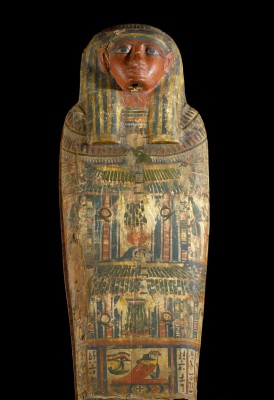 Visitors to the Bass Museum of Art will soon be able to experience the ancient world. On April 29, the museum will inaugurate the only Egyptian Gallery in Florida. The gallery offers a unique opportunity to learn about one of the worldâ€™s oldest and most mysterious civilizations from its surviving objects, including an Egyptian sarcophagus and mummy.

This project was conceived when the Bass Museumâ€™s Executive Director and Chief Curator, Silvia Karman CubiÃ±Ã¡, identified a Polychrome Wood Inner Sarcophagus and Mummy from 25th or 26th Dynasty (808 â€“ 518 B.C.) in the museumâ€™s collection. “With the opening of the Egyptian Gallery, the Bass Museum will appeal to a wide audience of art, culture, archeology and history lovers; children and adults alike. It will serve as the place in Miami to experience a long history of object-making and what these objects say about humankind from 700 B.C. through the present,â€ said Karman CubiÃ±Ã¡.

During the opening celebration in April and throughout the first year the gallery is open, the museum will mount an ambitious series of public programs to advance understanding of the customs and objects of Ancient Egypt. Special educational outreach efforts include IDEA@thebass Family Days and lectures by visiting curators.

The museum recruited Dr. Edward Bleiberg, Curator of Egyptian, Classical and Ancient Middle Eastern Art at the Brooklyn Museum, as Consulting Curator of the project to research and interpret the vast hieroglyphic paintings on the surface of the Sarcophagus. Dr. Bleiberg began his study in July 2009 by translating the hieroglyphic drawings on the inner sarcophagus to obtain more information about the mummy. Like most of the surviving Egyptian mummies, the Bass mummy is destined to remain shrouded in mystery. But it is this very type of ancient mystery that continues to intrigue Egyptian art enthusiasts throughout the world.

The Egyptian Gallery will be permanently housed in a 460 sq. ft. first floor gallery centrally located and close to the museum’s entrance. The gallery will showcase the sarcophagi, mummy and thirteen objects of Egyptian antiquity on long-term loan from the Brooklyn Museum, Lowe Art Museum and Private Collections. These objects are roughly from the same period as the Bass sarcophagi and provide a representative sampling of what would typically have been placed inside the tomb to assist the dead in transitioning to the afterlife. 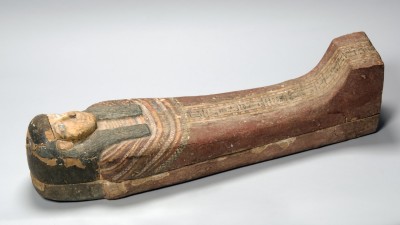 Miami Beach neighbor, Mr. Dan P.S. Paul, who sadly passed away this past February, left a generous gift to the Bass Museum of an Egyptian coffin and mummy and two Apulian vases. A renowned lawyer and specialist in First Amendment issues, Mr. Paul was a major crafter of the Dade County Charter in 1957 and was civically involved in many community issues. Mr. Paul will be memorialized in the new Egyptian Gallery and in future installation of the permanent collection. His legacy and spirit of generosity will continue to spread as school children and the general public enjoys these valuable objects.

Fun fact for anyone hoping to visit an Egyptian gallery: The next closest Egyptian gallery/sarcophagus is located at Michael C. Carlos Museum at Emory University in Atlanta, GA. This is 667 miles from Bass Museum of Art (Driving time: 10 hours 31 minutes).