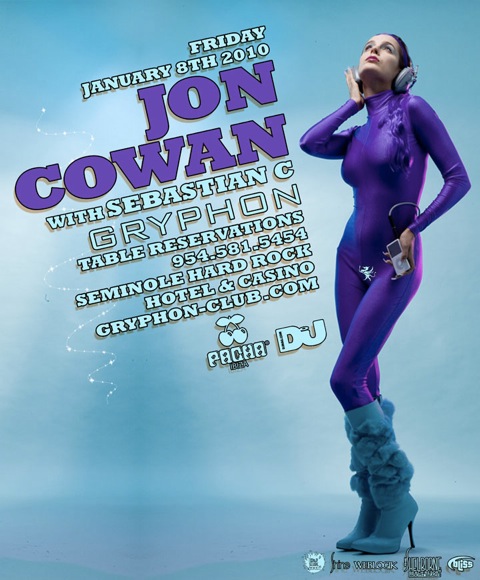 This Friday January 8th 2010 Gryphon at the Hard Rock Resort & Casino welcomes back the quickly re-rising star DJ Jon Cowan. Fresh off rocking the crowds for over 8 hours at Pacha NYC for Sander Kleienberg’s birthday party last week Jon has now secured a Pacha NYC monthly residency along with his summer residency at the Legendary Pacha Ibiza for their Flagship Night “PURE PACHA”. Jon has also been signed for Europe to Pacha’s exclusive agency being the only American on their very exclusive roster. To read a little more on Jon he recently did this story for Pacha In New York City http://pachanyc.com/blog.php/blog.php?p=164 Joining Jon this friday is long time friend and well respected DJ Sebastion C. doors open at 10pm so be sure to catch this rare local appearance by two of South Florida’s best locals. There is a guest List open until midnight so to get on please reply with your list and ask for Jon’s personal list at the door. see you all friday at Gryphon @ the Hard Rock Resort & Casino