{Just so you know, Soul Of Miami went to this last year and were we going to be in town, this is definitely where we would be this year.} 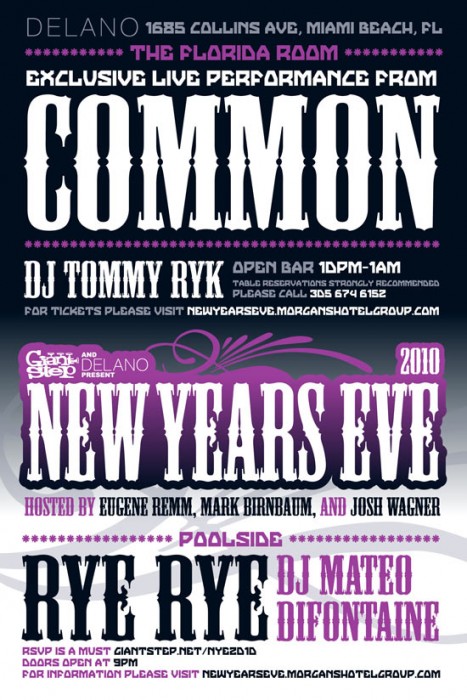 Giant Step is hosting the New Yearâ€™s Eve party you donâ€™t want to miss in Miami. We are back after last yearâ€™s epic celebration, which included performances from The Roots, Janelle MonÃ¡e and DJ Bobbito. This year, Giant Step brings in 2010 with a bang with Common and Rye Rye.

Common will be performing live in The Florida Room, which only holds 200 people. It’s going to be like having this Grammy Award-winning artist play with his killer live band in your living room, with all your friends in it. Open bar from 10 PM – 1 AM. Get your tickets early as this will sell out. Tickets start at $275.00.

Outside by the pool, we will have Rye Rye ringing in the next decade. The Baltimore native and protÃ©gÃ© of M.I.A. is one of the artists we’re tipping for success next year. FREE but you must RSVP for Rye Rye.

So if you want your NYE to be hot, book your ticket to Miami and join the Giant Step party!