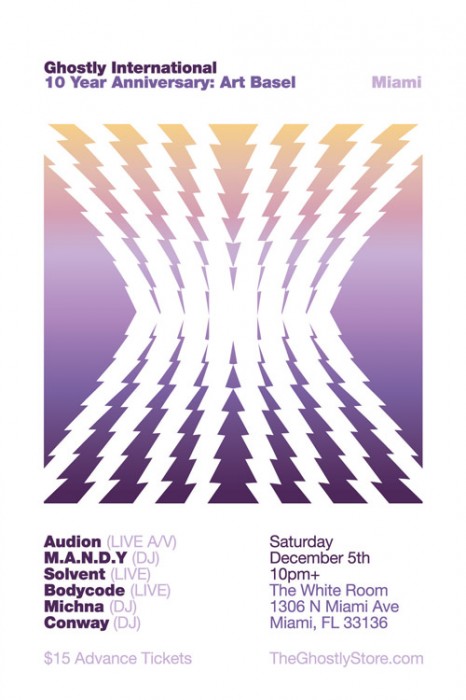 Limited $15 Advance Tickets on Sale now through http://TheGhostlyStore.com
Throughout this past year, Ghostly International has been celebrating its 10-year anniversary in grand style, throwing a series of infamous parties in globe-spanning locations from Berlin to Brooklyn, San Francisco to Barcelona, Seattle to Detroit, and everywhere in between. These events have been epic, to say the least.
On Saturday, December 5th, Ghostly takes its 10-year anniversary caravan to Miami for Art Basel.

With this being the last event of the anniversary series, Ghostly is bringing one of it’s finest line-ups to date, to play on a new sound system brought to you by Miami’s legendary sound designer Terry McNeil. Featuring audio and visual performances by Audion, Slovent and Bodycode with DJ performances by Philipp from M.A.N.D.Y, Michna and Miami’s own Conway.
This will be a late one.
Limited $15 Advance Tickets on Sale now through: http://TheGhostlyStore.com
This event will sell out.
Advance ticket purchases are highly recommended.
Space Is Limited.