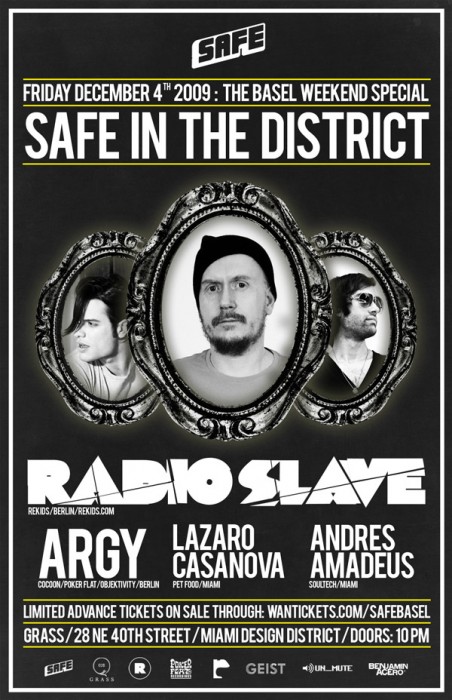 GRASS
28 NE 40th Street
Miami Design District
http://www.grasslounge.com
***
LIMITED $15 Advance Tickets Now On Sale Through:
http://www.wantickets.com/safebasel
***
—
No matter what sounds you profess to be your music of choice, chances are, that at some point over the last five years, you will have got your rocks off to Matt Edwards.
Radio Slave. Perhaps Mattâ€™s most instantly recognisable nom de guerre, thanks in part to his inspirational melding of Kylieâ€™s Canâ€™t Get You Out Of My Head to New Orderâ€™s Blue Monday, this is Mattâ€™s DJ moniker and the guise under which he completes his incendiary remixes and re-edits.
However, before such sonic schizophrenia gets you calling for the men in white coats, just feel the quality and consider Mattâ€™s legacy. Fired by the first wave of acid house, Matt gained his musical spurs by partying to dance music that was just that: music you danced to, irrespective of tribal factions.
This was the raison dâ€™Ãªtre he acknowledged when he took to the decks, first at Londonâ€™s legendary Milk Bar in 1992, then onto the, then, recently opened Ministry Of Sound and then to parties across the country, most notably in Wales â€“ where he was a regular at free parties â€“ and in Brighton, his home since 1998.
His love of re-edits, dance musicâ€™s oft-forgotten backbone, led Matt into the studio himself. His own re-edits and remixes, such as the aforementioned epoch-defining re-imagining for Ms Minogue, soon gave way to his own productions and since the floodgates opened thereâ€™s been no stopping the man known as, erm, Matthew E, Quiet Village, Sea Devils, Rekid and Radio Slave.
Heâ€™s released records for Skint, Soul Jazz, Classic, Whatever We Want, and heâ€™s worked with fellow travellers, Belgiumâ€™s The Glimmers. If Matt comes up with another two projects heâ€™ll have enough alter egos for every day of the week.
Psychologists would probably have a field day with him; mercifully, we donâ€™t have to worry about any crisis of identity, we just get to keep on dancing.
***
LIMITED $15 Advance Tickets Now On Sale Through:
http://www.wantickets.com/safebasel