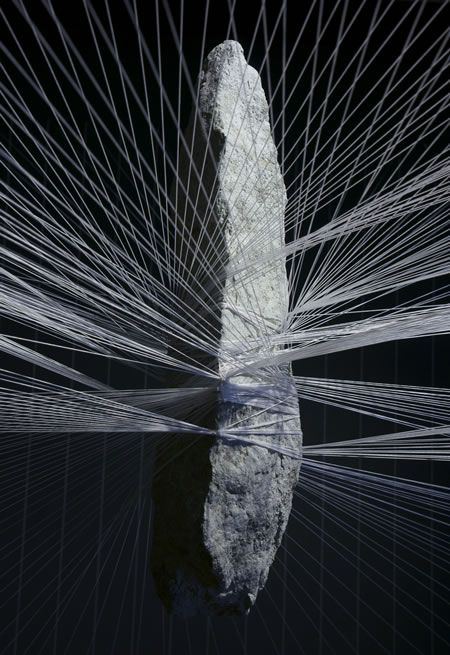 Milton Becerra has an original, distinctive and personal language, having a truly surprising power of renewal and revival: consistent with his artistic conviction, his own manner of assuming artistic creation.

The works gathered in this exhibition share this exceptional condition. Reference to myths of WayÃºu ethnicity, the elements of natural landscape and the manifestation of a geometric rationalism coexist in them without conflict, articulated under the principles of harmony and proportion.

Milton Becerra is probably the most fruitful and prolific Venezuelan plastic artist of his generation. His vast production comprises practically all the artistic means and procedures used in worldwide contemporary plastic research.

He allows himself to look back once and again to his own steps, revisiting his constant aesthetic concerns, taking up again some of his initial ideas in order to, upon redimensioning them, offer us a constantly new, unpublished work as far as his proposals are concerned and endowed with captivating beauty and strength.
His rock assemblies on a plane surface, observed through a scheme of dense knots, carried out by means of the adaptation of a metric and constructivist disposition, change these works into a sort of homage to kinetics, conceived by the use of icons and gestures belonging to his own artistic discourse, as are the rocks, ropes and knots. Indeed, in these works â€“ as in all of Becerra’s artistic works â€“ the common denominator seems to be the precise domain of space and its expression in aesthetic, poetic and symbolic terms.
A dense and closed network of threads, changes into a transparent veil, in an almost pictoric glaze, that allows the objects it holds to be seen against a neutral background: rocks, pieces of wood, ritual objects and weapons of the Yekuana Culture, solitaires, can be seen suspended in space, dialoguing in the abyss and composing a truly visual poetry. These works, holders of a unique symbolic force, refer one to a primitive, pristine, tribal world, to contents having a universal nature, with those that suggest the meaning of feminine and masculine sexual organs.
The installation LÃ­nea continua (Continuous Line) is a work overflowing with symbolic meanings and resonance. A single uninterrupted thread comes out of the wall, holds a rock and returns to its original location, repeating the operation an endless amount of times. This thread acts as a line (a structural unit of bidimensional plastic expression) that traces a geometric design on the white wall, but that is detached from same and is projected in tridimensional space. Thus, the same continuous line keeps the rock (of which one fancies a rocky insect trapped in a giant spider’s web), in suspension and levitation, creating a deeply metaphoric space denoting what is sacred, mystical, and spiritual. Adolfo Wilson
The exhibition runs until January 31, 2010.

About Durban Segnini Gallery
Durban – Segnini Gallery was founded in Caracas, Venezuela, in 1970 and in Miami, USA in 1992, by its present director and owner Cesar Segnini. It specializes in contemporary painting and sculpture, emphasizing in artists who have worked with abstract expressionism, geometric abstraction and kinetic art.
Simultaneously, the Gallery strives to promote and diffuse new artistic values as well as the historical vanguards that have influenced them. Exhibitions are open to the public all year round in their galleries in Caracas, Venezuela, and Miami, Florida, which includes the Coral Gables Gallery and the newly opened space in the Wynwood District of Miami, an area where a group of major international galleries have concentrated.
Worldwide, Durban – Segnini Gallery is known for its expertise in such areas as the integration of artworks to architectural spaces as well as for its customized cnsultant services to private collections.
3072 SW 38 Ave. Miami, Florida 33146
Wynwood Arts District Space 2145 NW 2nd Ave.
Miami, Florida 33127
www.durbansegnini.com