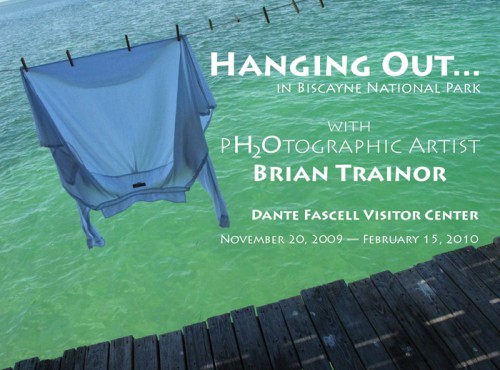 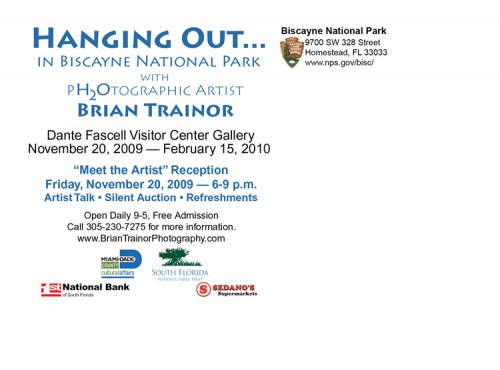 Miami photographic artist Brian Trainorâ€™s solo exhibition Hanging Out in Biscayne National Park opens at Biscayne National Parkâ€™s Dante Fascell Visitor Center Gallery on Friday, November 20 with a â€œmeet the artistâ€ wine-and-cheese reception from 6-9 pm. The evening features an opportunity to speak with the artist, hear about his work and bid in a silent auction for an original photograph. The show itself runs through February 15, 2010. Both the show and the reception are free and open to the public. The Dante Fascell Visitor Center is located at 9700 SW 328 Street, 9 miles east of Homestead, Florida.

A former Active Duty photographer in the US Navy, Trainor has spent nearly 30 years developing his skills as a photographer, and this show is nearly two years in the making. Although he shoots with a digital camera, Trainor never manipulates his photos after they are taken. Rather, he plays with focus and exposure to create a unique perspective. He will often nondestructively manipulate the scene to add interest to otherwise mundane objects. Where more traditional photographers might focus on the sun in a sunrise photo, Trainorâ€™s lens is pointing down at the water, camera askew at an odd angle. Mangrove trees against a bright blue sky are photographed through a watery medium for a fishâ€™s view. Even debris washed in along the parkâ€™s shoreline becomes beautiful in Trainorâ€™s photos.

All works in the show are available for purchase directly from the artist, and Trainor has donated one photograph to the South Florida National Parks Trust to be sold to the highest bidder in a silent auction at the opening reception on November 20. â€œInstead of choosing one photo that would appeal to many people, I decided to let the highest bidder choose their favorite and Iâ€™ll custom-print it for them,â€ said Trainor.