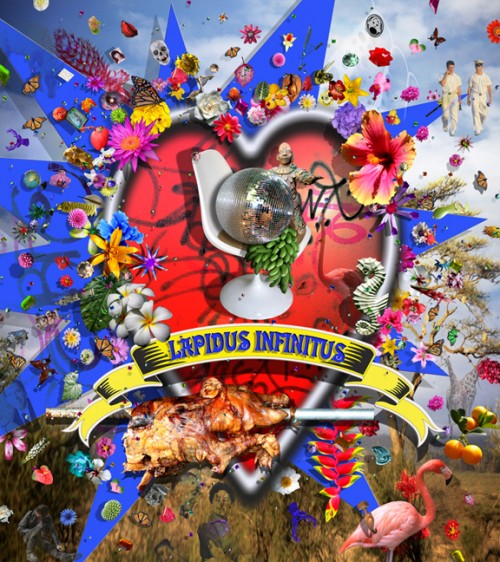 Betancourt will also be part of the official Studio Visits program of Art Basel Miami Beach, Saturday, December 5th, 9AM to Noon. The artist’s most recent artworks will be exhibited as well at this yearâ€™s edition of Pulse Miami at The Ice Palace, Diana Lowenstein Fine Arts, Booth A101. Additionally, Betancourt’s Re-Collection series was selected to be reproduced as part of a limited edition collaboration with bathing suit designer Red Carter and Barney’s New York. A private fundraiser will take place at Barney’s of New York, Miami Beach store, Friday, December 4th, 2009.

Further details will be announced at a later date.

In Betancourtâ€™s most recent photographic artwork, the artist continues to assemble explosive compositions consisting of thousands of photographs of objects, people, flowers, and many other elements that occupy the superb glitzy realm of beauty for which he is known. The images appear in their full kitsch splendor, possessed by an enchanting light and seemingly crystallized by a magical sorcerer.
Betancourt, also recognized for his large scale flamboyant interventions, will also unveil one of his most challenging installation to date, a sprawling three-dimensional artwork of multiple column pedestals, each supporting an accumulation of auspicious objects to be worshipped. A symmetrical assembly creates spaces for interaction within this fantastical world. As with the photographic compositions, this large-scale installation titled PORTRAIT OF A GARDEN, iconize Pop and common objects the artist has gifted with a unique sense of dignity. He has empowered the towering of elements and its base by presenting them primarily in his signature blue, being this â€œthe color evil cannot cross” (*). This installation is in collaboration with architect and artist Alberto Latorre.
*( as quoted by Robert Farris Thompson, dean of the History of Art Department, Yale University, in an essay about the artist).

ARTIST BIOGRAPHY:
Artist Carlos Betancourt was born and raised in San Juan, Puerto Rico. In 1981 he moved to Miami, Florida. Mr. Betancourt’s artwork is part of public collections such as the Metropolitan Museum of Art in New York, the Smithsonian National Portrait Gallery in Washington, DC, the Miami Art Museum, the San Antonio Museum of Art in Texas, the Bass Museum in Miami Beach, etc. Betancourt’s artwork has been included in multiple solo and group exhibitions as well as fairs such as Art Basel and Arco. He is the recipient of numerous awards and grants, including the Florida Department of State Millennium Cultural Recognition Award, a National Endowment for the Arts grant and the Miami Beach Arts Council Grant. He has been awarded commissions to create artworks for various Art in Public Places programs. Betancourt is co-founder of 801 Projects, an arts center that provides studio spaces for visual artists based in Miami.