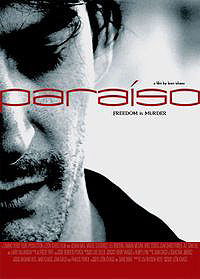 â€œ…At the end of the day, the movie will open in its natural habitat: a cinematheque. Regardless of the logic or times we live in, maybe this is the place, where films like this should enjoy to open at. Where only people seeking an experience like this will meet to see it. That’s the way it was then and that’s the best way there is, now. The Miami Beach Cinematheque will be the home for ParaÃ­so, just like 30 years ago, another cinematheque, opened El Super, in an almost underground event that grew into film legend. Friends, like Rene Fuentes-Chao, Natalio Chediak, Alex Rios, Orlando Rojas and Dana Keith, bringing the films in, one way or another, keeping the dream alive. None of us got into this wanting anymore than that. So here it is. A lucky day. A weekend with a film. Welcome home, ParaÃ­so.â€-Director LeÃ³n Ichaso 2009
ParaÃ­so is the new independent film of Cuban-American writer/director LeÃ³n Ichaso. Entirely shot in Miami, with a crew of 10 and 4 film students, it had its World Premiere at the Miami International Film Festival, 2009. Ichaso, who directed the Cuban- American classics El Super, Bitter Sugar, PinÃ©ro, and El Cantante, returns to Miami to tell the gritty tale of a Cuban exile’s arrival in Miami which leads to major trouble. A post-postmodern hybrid, part thriller, part drama, part existencial romance. . .ParaÃ­so explodes with heart, color, music and a desperate tale. In Spanish with English subtitles.
OFFICIAL SELECTION: Miami Int. Film Festival, New York Latino Film Festival
â€œA STYLISH AND CAPTIVATING TAKE ON CULTURAL ASSIMILATION. A bracing blast of uncompromising honesty that will surprise anyone expecting another poignant and heartwarming drama about Cuban exiles”-Rene Rodriguez Miami Herald
â€œThe SCORSESE of SALSEROSâ€-Mirta Ojito, New York Times
â€œIchaso is the lone wolf of filmmakers, the one who has given up everything else for the sake of his artâ€ Alejandro Rios, Cuban Film Series
Director LEÃ“N ICHASO will be in attendance for intro and Q&A,
with Alejandro Rios, Founder of the Cuban Film Series in Miami.
(with premiere reception including LIVE guitar on Friday!)
$12 & $10 Members/$11 Students & Seniors on FRI,
Regular prices SAT & SUN.
For tickets click HERE