31 SAT 2pm:
A CONVERSATION with FRANCIS FORD COPPOLA!
With LIVE WEBCAST Q&A WITH FFC HIMSELF!
(Direct from Greece!) 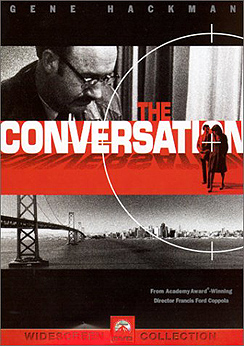 Francis Ford Coppola’s The Conversation is one of the great American masterpieces of the 1970s, with one of the most intricate yet subtle scripts ever written (by Coppola himself, in his one and only original script until Tetro in 2009). Gene Hackman, in one of the best acting roles of the period also, plays surveillance expert Harry Caul, who makes the mistake of getting personally involved in a disturbing assignment. Is he the victim or the instigator?. . .
WINNER: Cannes Film Festival Palm d’Or and Special Jury Prize
(SATURDAY film and LIVE WEBCAST Q&A WITH FRANCIS FORD COPPOLA is $12 or $10 MBC Members/$11 Students & Seniors)
For tickets click HERE