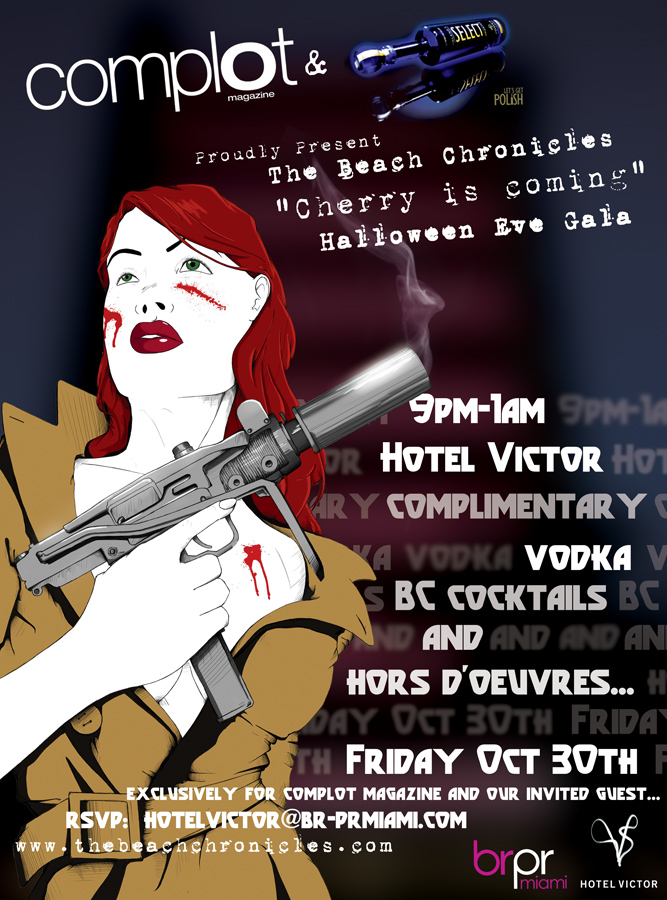 The Beach Chronicles Halloween Gala
Friday, October 30, 2009 at 9:00pm
The Victor Hotel, 1144 Ocean Drive, Miami Beach, Florida 33139
The much anticipated “The Beach Chronicles” Halloween event is coming on October 30th to The Victor Hotel and it’s free (to you, our invited guests and your friends). We’ve had a tremendous and incredible response to the series and our premiere event at the Miami Beach Cinematheque. Now we’re opening it to the public on our home turf. BRPR and Select Vodka present The Beach Chronicles “Cherry is Coming” Halloween gala. We will premiere the latest vignette “The Order Moves In” and showcase the first chronicle featuring Jimmy Jean Louis from the television show HEROES. Expect celebrities, expect press, expect an event like no other. Come dressed in your most incredible costume for a chance to be immortalized in the next chronicle “Miami Circle in a Box”. There will be complimentary TBC cocktails, hors d’oeuvres and more…This is the Halloween event not to miss. If you made it to the premiere event you know what I’m talking about.
For more about The Beach Chronicles join our fan page at:
Facebook
TBC website
Twitter
and for TBC die hards follow TBC detective Dirk Jenson
We would like to thank everyone for their overwhelming support and are blown away by the response so far. If you can make it to one event this is the extravaganza to see and be seen at. Please RSVP to rsvp@br-prmiami.com

THE BEACH CHRONICLES â€“ HALLOWEEN EVE GALA
The Hotel Victor and Select Vodka are thrilled to be hosting the much highly anticipated Beach Chronicles Halloween Eve Gala to be held Friday, October 30th at 8:00 p.m. at the stunning Hotel Victor rooftop. Guests will be spoiled with complimentary Cherry Redding Select Vodka cocktails and horsâ€™douerves from the famed Vix restaurant. The Hotel Victor outdoor veranda will certainly set the pace for what is surely to be the sexiest Halloween event to hit Miami Beach. Look for the fashion forward and cult following of The Beach Chronicles to come dressed in some of the most avant-garde costumes on this Halloween eve.

The Beach Chronicles has created tremendous buzz by incorporating fashion, local socialites, and high profile Miamians into the actual fabric of this animated series. â€œWe have gone to great lengths to include people and landmarks familiar to Miami to ensure the authenticity of the story. The Hotel Victor serves as a centerpiece and makes it the perfect host venueâ€ says co-creator Kevin Sharpley. Emerging designers abound in creating the costumes The Beach Chronicles characters are now famous for; 50â€™s mod with a modern twist is the overriding theme. â€œI couldnâ€™t be more excited to see my dresses on The Beach Chroniclesâ€™ character, Cherry. Itâ€™s sexy, itâ€™s current, and itâ€™s Miami!â€ exclaims celebrated emerging designer Jason Louis Studnicky. â€œI think the clothes and the amazing art deco buildings of South Beach are what make The Beach Chronicles so incredibleâ€, gushes actor Jimmy Jean Louis of the hit TV series Heroes and voice of The Beach Chronicles character Jacques Jean Jilles. This event will be a celebration of Miami fashion represented in The Beach Chronicles series as well as an opportunity for attendees to express themselves in their favorite costume of mystery and seduction.

South Beach and the word sexy have become synonymous and the Hotel Victor, The Beach Chronicle and Select Vodka will serve as a testament to that well earned reputation. Expect the evening to be peppered with the â€œwhose whoâ€ of Miami Beach society dawned in their Halloweenâ€™s best, all in the spirit of our most beloved excuse to get dressed up; Halloween.

About Select Vodka: Select Vodka represents the purest in the evolution of a centuries old tradition. Found and celebrated amongst connoisseurs and enjoyed at the finest of happenings. (www.selectvodka.com)

About Hotel Victor: Hotel Victor is located on popular Ocean Drive, Miami Beach, offering ocean view rooms, inventive and gracious amenities, representing the best from the past and the comfort of the present. (www.hotelvictorsouthbeach.com)