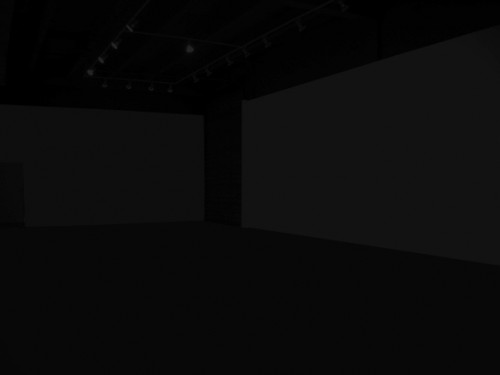 David Castillo Gallery is pleased to present You might sleep, but you will never dream, Leyden Rodriguez-Casanova’s second solo exhibition at the gallery.

The artist uses a vocabulary of domestic objects and suburban architectural elements as a visual language, addressing our social, cultural and emotional existence. He uses material appropriations first introduced in post-minimal and conceptual art. Rodriguez-Casanova is presenting a series of objects that use a room as the point of departure for his concepts. All the objects are elements of a room which have been detached from their original context.

As the title of Damien Hirst’s work suggests, The Physical Impossibility of Death in the Mind of Someone Living, Rodriguez-Casanova is interested in understanding the loss of someone, including one’s self (and the “impossibility” of such). In the work An Open Door, 2008 commissioned for the Dennis and Debra Scholl Collection, the artist built an entirely new wall with a blackout doorway created by a black sheet of plexi. The opening becomes a metaphor for what lies beyond our existence. This same element exits in A Folded Bed, 2009 in which a portable folding bed is intersected by a large sheet of the same black plexi. The black plane once more is a metaphor for a void. In A Bedroom Floor, 2009 the artist has recreated the exact tile grid of his adolescent bedroom floor. A nod to Carl Andre, the work uses its own detachment and “negative space” properties to focus on the floor and its plight in its original context.

Leyden Rodriguez-Casanova lives and works in Miami, and has exhibited nationally and internationally. His work has been featured in publications such as Art in America, ARTnews, and Sculpture Magazine. The artist has recently exhibited at Socrates Sculpture Park and the Sculpture Center in New York, among many other venues.

In the project room, the gallery is proud to present Amir H. Fallah’s Flowers and Terrorists.

The stark juxtaposition of flowery still lifes and political statements confront the severe spectrum the world lives in. Fallah uses familiar colors and collage elements to blur the line between beauty and violence. Fallah’s still lifes “his mother wishes he would paint” are sullied through his chaotic use of explosive color, while the terror-themed paintings are calmed by the easier transitions of subtle colors.

In the David Castillo Annex, Amir H. Fallah constructs a single tower of objects from found materials in Miami. In this installation as in his paintings, the artist combines the subjects of still lifes and political statements, re-enforcing the dialogue between them. The site-specific installation is a commentary on how beauty and terror are ultimately conjoined in life.

The Los Angeles-based artist has exhibited nationally and internationally. He is also the publisher of the contemporary arts magazine Beautiful/Decay. Fallah received his B.F.A. from The Maryland Institute College of Art and his M.F.A from UCLA in 2005. He was included in the 2009 Sharjah Biennial.