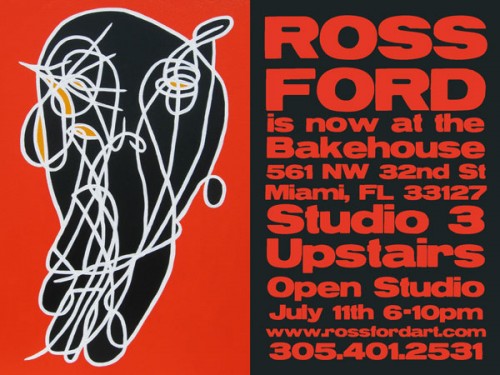 Ross Ford, one of Miamiâ€™s most prolific young painters, has moved his studio into the BakehouseArt Complex (BAC) in Wynwood. He will feature his 2009 collection during the neighborhoodâ€™s monthly Artwalk on July 11, 2009.

Ross Ford To Exhibit 2009 Collection At New Studio
Artist hosts reception on Second Saturday
Ross Ford, one of Miamiâ€™s most prolific young painters, has moved his studio into the Bakehouse Art Complex (BAC) in Wynwood. He will feature his 2009 collection during the neighborhoodâ€™s monthly Artwalk on July 11, 2009.

Other Bakehouse residents will also open their studios to the public for the Second Saturday party.

ABOUT ROSS FORD:
Since moving to Miami in 2004, Ross Ford has exhibited in more than 35 group and solo shows with his signature style of abstract facial expressions. He creates his faces through a process called â€œIterative Expression,â€ which is the repetition and evolution of emotions, colors, forms and strokes. Originally selling his art on the street in Miami Beach, Ross moved into Butter Gallery in 2007 where he was featured as one of its primary artists. In 2009, Ross moved his studio into the Bakehouse Art Complex in Miami. His artwork has been featured in Daily Candy Miami, JoshSpear.com, City Link Miami and the Travel Channel show â€œ5 Takes.â€ His work is currently on display at the Van Dyke Cafe Upstairs on Lincoln Road and the Century Hotel on Ocean Drive in Miami Beach. Ross Ford has a Bachelors Degree from Hampshire College and a Masters Degree from the University of Florida. For more information, visit www.rossfordart.com.

ABOUT THE BAKEHOUSE ART COMPLEX:
The Bakehouse Art Complex is a not-for-profit organization dedicated to attracting emerging and mid-career artists in South Florida to a workplace that provides affordable studios, exhibition galleries, and professional development opportunities. The artists, who are juried-in tenants, come from many different states and countries bringing with them many different intellectual, social and artistic experiences. By attracting and involving new audiences into the contemporary and culturally enriching world of the visual arts, the BAC continues to be an accessible vital resource to the diverse and dynamic South Florida art community and its patrons. The BAC facility is located in the internationally renowned Wynwood Arts District, a designated area of Miami comprising more than 50 galleries, alternative spaces, private collections and museums. For more information, visit www.bacfl.org.