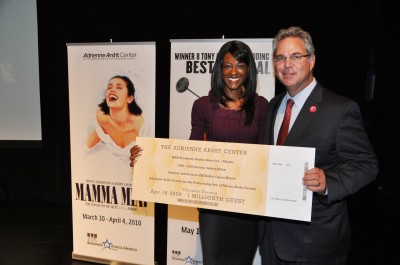 Miami resident Toya LaRenn made Miami history on April 16, 2009 when she became the one-millionth patron to visit the Adrienne Arsht Center for the Performing Arts of Miami-Dade County. Upon entering the Sanford and Dolores Ziff Ballet Opera House for that eveningâ€™s performance by the Alvin Ailey American Dance Theater, Ms. LaRenn was notified of this milestone and invited to join M. John Richard, President and CEO of the Adrienne Arsht Center, in upgraded seats. She was also awarded a Supporting Level membership to the Adrienne Arsht Center and a subscription to the 2009-2010 RRA-Broadway Across America Miami series.
On April 20, Ms. LaRenn was introduced to the community during a special luncheon to announce the upcoming RRA-Broadway Across America series. Mr. Richard presented Ms. LaRenn with an oversized ticket commemorating her as the Centerâ€™s one-millionth guest.
â€œTo think that we have welcomed one million people in such a short span speaks to the Adrienne Arsht Centerâ€™s extraordinary reach and broad-based community support,â€ said Mr. Richard. â€œGoing forward, we are committed to driving new audiences to our diverse programs and events so as to unite South Florida through the performing arts. That
community spirit is what this Center was built for, and itâ€™s what will drive our next million patrons through our doors.â€
Guests at the April 20th event were treated to a surprise performance by Montego Glover, who previously starred in the Broadway production of the hit musical The Color Purple. The luncheon also featured a sneak-preview of the 2009-2010 RRA-Broadway Across America Miami season, which will feature The Color Purple, October 27-November 1, 2009; 101 Dalmatians, December 30, 2009-January 3, 2010; Wicked, March 3-21, 2010; Mamma Mia!, March 30-April 4, 2010; and Spring Awakening, May 11-16, 2010. In addition to these hit musicals, the season will also include The Walworth Farce (November 4-7, 2009) and a dynamic performance by Broadway icon Brian Stokes Mitchell (December 12, 2009).
For tickets and membership information, please visit www.arshtcenter.org.