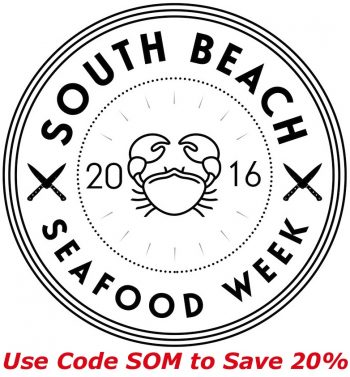 It is with much excitement that the 4th annual South Beach Seafood Week is back kicking off Stone Crab Season in style! With three times the food, three times the experience, and only 1/3rd the wait, get ready for the ultimate seafood extravaganza featuring luxury dining on the sands of South Beach. The main event, South Beach Seafood Festival, brought to you by Kendall Jackson, will hit the beach! This yearâ€™s event will be presented by Jack Daniels, Breakthru Beverage, GOYA Foods, and Celebrity Cruises, and hosted by Coca-Cola.

The 2016 restaurants will pop up cafÃ©s for guests to enjoy 60+ of the best seafood menu items available in South Florida! The full list of restaurants include Joeâ€™s Stone Crabs, Naked Taco, Red, the Steakhouse, CJâ€™s Crab Shack, Drunken Dragon, A Fish Called Avalon, Naiyara, Poseidon, Toro Toro, Trulucks, Papaâ€™s Raw Bar, Midtown Oyster Bar, CafÃ© Avanti, CIBO Wine Bar, Naked Crab, The Avenue, and Whole Foods Market. Festival ticket prices start at an affordable price of $35 and include complimentary bars throughout the festival grounds. Guests can listen to music at the various music stages, including the Jack Danielâ€™s Beach Club, sip on refreshing wine or a few cocktails, enjoy chef and mixology demos in the Whole Foods Market, and spend the day trying all the delicious menu items from these luxury dining establishments, who keep their menu prices affordable between $5-$8, just for the Sobe Seafood day. Get ready for stone crabs, stone crabs, and more stone crabs, along with lobster tempura skewers, mahi sliders, scallop BLTs, oysters, shrimp tacos, lobster roll waffle cones, crab cakes in a shell, grilled octopus, shrimp parmesan, surf nâ€™ turf filet and lobster, and more. VIP tickets are $150 and include food vouchers, access to the VIP Hospitality Village, private samplings, and so much more. Event is open to the public, but must be 21+ to consume alcohol. South Beach Seafood Week benefits Community Initiatives Foundation and the annual Eat Smart program, fulfilling the perfect balance between youth nutrition and childhood development in Miami Beach.

Friday, October 21, 7-11PM: Chef Showdown, brought to you by Matanzas Creek Winery, and presented by GOYA, Herradura, and Celebrity Cruises. This is the ultimate battle of all battles showcasing the best in Miamiâ€™s culinary scene at 9th & Ocean Drive in GOYAâ€™s Culinary Pavilion. 12 chefs get paired head to head creating 6 of the ultimate seafood battles. Chefs from each battle will take the showcase kitchen stage, where media guests will judge each showdown. The deciding factor are THE GUESTS as they visit each restaurant sampling station around the village and vote to decide the newest 6 Champions of the Chef Showdown. Reigning champions defending their titles are Chef Andre & Tyler Bienvenu of Joeâ€™s Stone Crab in Battle Lobster, Peter Vauthy of Red, the Steakhouse in Battle Surf â€˜N Turf, Chef Dustin Atoigue of Mondrian South Beach in Battle Shrimp, Chef Xavier Torres of Drunken Dragon in Battle Tuna, and Chef Bernie Matz of Bodega South Beach in Battle Taco. The newest battle will be Battle Fish along with an all new Herradura Cocktail Showdown, hosted inside Casa Herradura, featuring competing top bartenders in South Florida. The 2016 Battles will be announced in September on @sobeseafoodfest.