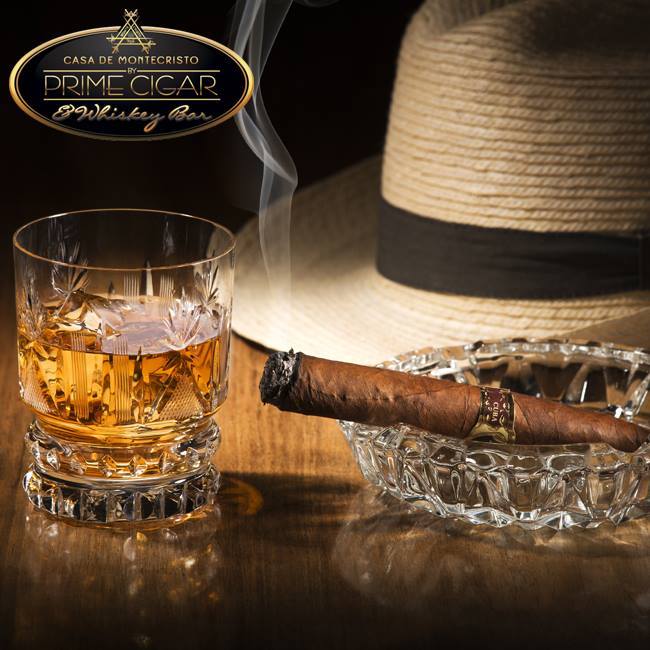 Casa De Montecristo by Prime Cigar & Whiskey Bar, is about to open in one of Miamiâ€™s most dynamic neighborhoods, where commerce and nightlife combine seamlessly. The 4,700 square foot location at the new Millicento tower, 1106 S Miami Ave Suite 202, is soon going to show the public what â€œsophisticated relaxationâ€ really means. The term coined by owner-operators Jason Reznik and Ryan Leeds is actually a culture they developed at the first Boca Raton location. Very soon, Miami cigar enthusiasts, and active movers and shakers, will experience the Prime- lifestyle.

Prime Cigarâ€™s first location set them apart as the premier cigar bar in South Florida. This second location will be in partnership with Altadis USA, one of the worldâ€™s top premium cigar manufacturers. In just two weeks, this one of kind cigar and whiskey lounge will officially open its doors to local VIPS, city officials, and special celebrity guests.

Knowing they were setting up shop in Miamiâ€™s business district, at Brickellâ€™s newly built 1100 Millecento residential tower; Reznik and Leeds have upped the ante. Upon entering the very chic bar and lounge, to their walk-in humidor, lounge, private board room, private members lounge, custom furniture and elegant design elements, this location will speak to the individual wanting much, much more.

Prime Cigar is commitment to providing only the best for true cigar aficionados and power players, via a multitude of elements including: rare whiskeys, craft cocktails, premium and vintage cigars. Not stopping there, Ryan Leeds and Jason Reznik have committed to the community they are now in. The duo is proud to announce their community partnership program which will launch with their multi-day grand opening this May.

Commencing with the grand opening, Casa De Montecristo by Prime Cigar & Whiskey Bar and Lifestyle Lounge will partner up with, and support twelve local charitable organizations as a way to give back to the South Florida community that has helped them since they began the Prime Cigar brand. They carefully selected organizations that need support, local awareness and strong local partners.

Some of the amazing foundations include: Neat Stuff for Kids, Easter Seals of South Florida, United Way, Leukemia and Lymphoma Society, Boys and Girls Club of Miami-Dade, Zoological Foundation, Miami Childrenâ€™s Health Foundation, Childrenâ€™s Home Society, Kiwanis Club of Little Havana, Latin Builderâ€™s Associationâ€™s LBA Children and Families Foundation, St. Jude and Ronald McDonald House Charitiesâ€™ of South Florida. The community partnership program will consist of awareness, driven directly via the marketing, promotional and publicity efforts by Casa De Montecristo by Prime Cigar & Whiskey Bar, and its partners. This will include and not limited to fundraisers at the venue and product donations. They hope to inspire other neighboring locations, to embrace this program and launch similar efforts.

Ryan Leeds stated: â€œWe are coming into a new [community], we want to support the needs of local organizations. We understand we must do our part in supporting those around us as well. Our hope is to create amazing relationships that will make a difference.â€
For more information on Casa De Montecristo by Prime Cigar & Whiskey Bar, please contact Creativas Group at: info@creativasgroup.com. Photographs and interviews are available by request. Follow on social via @ Casa De Montecristo by Prime Cigar & Whiskey Bar.
ABOUT PRIME CIGAR & WINE BARFounded in 2010, Prime Cigar & Wine Bar is a cigar bar and lounge featuring premium cigars, top-shelf spirits, and fine wines. Prime Cigar delivers a â€œsophisticated relaxationâ€ experience to all its guests and boasts a state-of-the-art air control system, ensuring a comfortable smoke-friendly environment.

About Altadis U.S.A.
Founded in 1918, Altadis U.S.A. is one of the largest cigar manufacturers in the world, and is responsible for many noteworthy and celebrated premium cigar brands including Montecristo, Romeo y Julieta, H. Upmann, Trinidad, and VegaFina among others.. Altadis U.S.A operates premium cigar production facilities in the Dominican Republic and Honduras with production affiliations in Mexico and Nicaragua. For more information about Altadis U.S.A., please visit their website at www.altadisusa.com