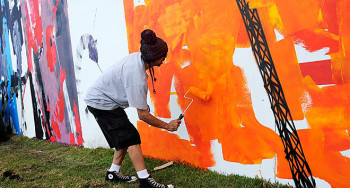 In 2009 Tony Goldman was looking for a way to transform the warehouse district of Wynwood. He had a vision of creating a center that would attract the masses giving people a beautiful new place to explore.Â Â  Due to Tonyâ€™s passion for street art, The Wynwood Walls have now been transformed into magnificent murals done by some of the worldâ€™s most talented artists.

Tonyâ€™s goal was to change the way street art is viewed by presenting people with a place to understand it and enjoy it. He began the project at the 25th-26th Street complex with 6 separate buildings whose walls would feature graffiti and street art. Due to the positive feedback from his 2009 endeavor Tony decided to continue the project in 2010 by creating the Wynwood Doors, which is 175 feet of roll up storefront gates that have now been transformed into murals by some of the worldâ€™s greatest artists.

When the project began back in 2009 Jeffrey Deitch collaborated with Tony to help make the Wynwood Walls a success. When it came down to artist selection, Tony selected artists with help of Goldman Properties Arts Manager Meghan Coleman, and Medvin Sobio of the Visual Arts Collective Viejas Del Mercado. Artists from the United States, Brazil, Belgium, Mexico, Portugal, Ukraine, Portugal, Greece, Spain, Germany, France, England, Japan and Singapore are featured on the Wynwood Walls and Doors.

The Wynwood Walls attract thousands of people each year. Not only are these stunning walls attracting the masses, but also they are changing the way people view street art. What was once a misunderstood artistic expression is now admired and appreciated by the masses, as it should be!

Who are your favorite street artists? Let us know on Twitter! Tweet us at @Loop305 with the hash tag #PublicArtWednesday