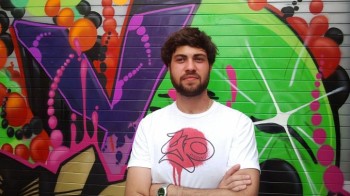 Yuval Ofir is a Miami Native. After attending the University of Miami in 2009, Yuval became immersed in the Miami Blog culture. Yuval is now the founder of Yo Miami and was responsible for opening Yo Space, which is a studio for artists and galleries. Â Yuval’s love for Miami and art has allowed him to help Miami artists for years.

Who has been your most influential mentor?Â

My grandpa has definitely been one of the most influential people in my life in general. Having seen first hand over the years how he runs his business (which I now run with my cousin) and supported even our extended family members, I couldn’t have asked for a better example of integrity. As for my more recent (starting in 2011) foray into the art world, James Echols and Annette Peikert of Life is Art and SoulofMiami.org have been the people I turn to most often when it comes to getting advice on how to proceed when the path becomes unclear ahead of me.

How did you get to where you are today?Â

I was born and raised in Miami, and graduated from the University of Miami, though was fortunate enough to travel abroad a lot in my younger years. I started working for my grandpa’s company in the warehouse and making deliveries when I was 15 and have been working my way up ever since. After graduating college in ’09 I moved to the Omni area to be closer to our office/warehouse in Wynwood and that’s when I started getting sucked into the art and cultural scene that started blossoming around that time.

How did you get to be a community leader?Â

I guess it’s still hard to think of myself as a community leader but I guess just by following the example my grandpa set for me. When making a serious decision whether for the family business or Yo Miami, I always try and remember that I need to be willing to stand behind it for the next 5, 10, 20 years. Developing the network of artists, musicians, business professionals, and others I’ve built up at this point was really just a result of never being afraid to pursue an opportunity that presented itself. Then of course if something develops, making sure I tackle every project thoroughly and efficiently so that people will want to work with me on the next one.

Where do you see yourself in 5 years?Â

So many things are on the horizon that it’s hard to say. Definitely still in Miami (though maybe a little further north where things are a little slower paced, what with all the big developments coming down the pipeline in the downtown/wynwood areas), possibly raising a kid or two with my wife, and hopefully still involved in making some amazing things happen for the art and culture scene here.

What about this city inspires you?Â

I think the fact that it rarely feels stagnant living here. It’s such a young city and covers such a broad spectrum of cultures and influences, that it’s almost impossible for it to stay the same for too long. Ideally the cream rises to the top and the great businesses establish a place for themselves within it but unfortunately because things are so spread out, sometimes even the good guys don’t make it in the end.

What is your favorite thing about Miami?Â

The variety. Whether it’s settings (parks, beaches, urban, rural, etc.), people, cultures, restaurants or architecture, you always have a million and one choices.

Miami should beâ€¦Â taken with a grain of salt.

Miami could beâ€¦Â the greatest place to live in the world.

Miami needsâ€¦Â time to find itself.